Posted by Chris Mathews
· No Comments

INTERVIEW WITH DR. Fil Munas, author of Mission To Earth 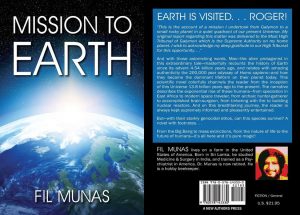 Fil Munas fashions a string of long short stories as a chassis, a platform, for the profligate history of planet Earth since its inception and of the achievements  and failures of homo sapiens, as they await a sixth major mass extinction.

Murli Melwani (MM). Dr Munas it is my pleasure to interview the author of a book that has been compared to Stephen Hawking’s A Brief History of Time. You have presented a large number of themes in Mission To Earth. Could you please outline the themes?

Dr Fil Munas (DFM)… I truly appreciate this privilege to appear on your blog, Murli. Thanks! You started me off on an easy one. I am humbled by the quote you took from Dr. Surendra Kelwala, a famous psychoanalyst here in America. Stephen Hawking is one of my heroes, and to be compared to him is indeed a great honor. In fact, Hawking’s speculation than incoming extraterrestrials could harbor malevolent intent toward humans, supports a passage in my novel (page 17):

Most unsolicited extraterrestrial contacts are usually intended to secure territory and strip resources from stars and planets. The hunt for copious oxygen bearing atmospheres to expropriate and use for the benefit of the invaders is especially common in certain parts of the Universe. These oxygen hunting species, frequently fleeing oxygen depleting worlds, confiscate oxygen rich ones like Earth, often decimating preexisting lifeforms on captured territory.

Fortunately for all concerned, the visitor this time turns out to be rather benign. The plot of my novel—and it is a science-fiction, or a “scientific” novel—describes the adventures of the protagonist Mac, a visitor to Earth from a planet called Galymon in a different galaxy. Mac informs the reader at the very outset about the Commission assigned to it (Mac has no gender). We are told on page 12:

My name is Mac. I was commissioned by the Most High Tribunal of Galymon to journey to a small rocky planet selected from among several dozen other life bearing planets we detected during a systematic scan of space in a narrow wedge of the Orion Arm in the Milky Way galaxy.

One of the difficult tasks in writing a novel such as this, is to not become careless and accidently assign Mac a gender at any time! That was hard to do.

Mac concisely describes and records the profligate history of planet Earth since inception, and of its currently dominant species, Homo sapiens. That is the plot. I have tried to write this novel in an unusual style, not normally encountered in modern literature. The book is divided into 14 chapters enclosed within a brief prologue and epilogue. The chapters themselves are organized into vignettes, bracketed within embellishments. Each vignette, though woven into the fabric of the main novel, has the ability to stand on its own and be read as a “long short story” apart from the main tale. This allows the busy modern reader to start and put down the book at any time, permitting a more leisurely and unconventional platform for reading a novel packed with complex scientific information. The manuscript can be opened anywhere to read at will by the gentle reader. The late great Sir Fred Hoyle used a storyline in his timeless book, The Black Cloud, where a sapient being attempts to transfer information to a human and overloads the circuits. I remembered this cautionary encounter from Sir Fred’s own extraterrestrial tale. Since my book is an “opus” novel (527 pages), this was especially necessary! I have added footnotes—again an unusual device for a novel—as explanatory asides.

MM: Please comment on the narrative curve of the themes.

DFM… The literary devise of an extraterrestrial visitor is not new. Voltaire used the technique in his Micromégas. In a different sense, Jonathan Swift did that in Gulliver’s Travels. The narrative curve in my novel follows the encounters of the protagonist Mac during a visit to Earth, and is communicated in the first person. For example, a passage in my novel, an eyewitness account by Mac when that bolide struck Earth 66 million years ago to wipe out the dinosaurs and usher in the last major mass extinction, reads as follows (page 66):

Right about then, a whistling sound could be heard approaching from the north. Within moments it had become an earsplitting boom. A brilliant light appeared in the sky, slicing violently through the cloud cover, heralding the end of that world. A huge object from space traveling at 12.5 miles a second was about to strike the planet. Exactly at 12:08:02 PM, an enormous fireball brighter than a thousand suns smashed into Earth’s lower atmosphere, releasing more energy upon impact than five billion Hiroshima sized atom bombs. The payload comparison here is to the atomic bomb dropped by the United States of America in 5 BP on the city of Hiroshima in Japan. The Hiroshima bomb was a small uranium fueled nuclear fission bomb with a yield of 15 kilotons, the explosive equivalent of 15,000 metric tons of trinitrotoluene (TNT), a chemical explosive. That single atomic bomb leveled an area of about 2 miles in diameter around the point of impact. Between 60,000 to 80,000 people were killed instantly. In just 150 days, close to half the city’s human population of 340,000 were dead. More died later from delayed radiation effects. My gentle reader can imagine what an asteroid or centaur packing the punch of 5 billion such bombs would do.

MM: The structure of the book in reader-friendly. Your comments please.

DFM… Thanks you noticed that!—it was most important to me. The reader is the real protagonist, and I have tried to deal with him or her with the greatest of respect and the highest of regard. Because the manuscript is chock-full of advanced, real-time (and future!) scientific information, I have tried to explain the details as best I could, without patronizing the reader’s intelligence.

MM: How did you get the idea for the book? What made you choose such a vast subject?

DFM… Your question embarrasses me! The subject is indeed vast and literally encompasses the entire history of the current Universe. That may be an impossible task, even for a pretty smart extraterrestrial! The subject is enormously important, though. Our biosphere is now experiencing a sixth major mass extinction since metazoans appeared on this planet in the Cambrian 500 million years ago, and humans are the primary cause for this.

MM: What was your reason for choosing, Mac, a visitor, from another planet, as the character through whose eyes we see the evolution of Mother Earth?

MM: Let us leave aside Mac’s point of view for a moment. What are your thoughts of the response of the present generation to climate change, emissions and other occurrences that may impact the survival of our species?

DFM… You hit the nail on the head, Murli. The present generation and their elders have been thoroughly derelict in their duty to Mother Earth. They are “shitting where they eat” as the saying goes.

MM: How much research went into a book with such a broad vision?

DFM… A lifetime—and that may not be enough. I am grateful to Christian Medical College in Vellore, South India, for preparing me with the basics for this task.

MM… Please tell us about your publishing journey. Publishers nowadays are interested in manuscripts that turn in a quick buck.

DFM… Yes indeed, it’s hard not to be Stephan King—I hope this interview will sell me a few more books! For a first time author, publishing can be a nightmare. Just getting someone to read your manuscript is hard enough. Fortunately for me, I had dear friends who eased this tribulation.

MM: I understand that the book has gone into a second reprint.

DFW: I didn’t push it.  It moved on its own steam. I’m grateful to my readers.

MM: What are your future literary projects?

DFM… I don’t want to jinx it, but I’m sort of working on my second book, provisionally called Biology Of Religion. I hope the title is not too grandiose.

MM… Thank you for your time.

DFM… Thank you, Murli. It was my privilege and pleasure.