So warm and attentive is the writing in Annie Zaidi’s new short-story collection that it comes as a little shock when you think about what some of her characters are really going through. This book’s tone is consistently hushed, reflective, shorn of hysteria – even in a description of two people arguing, with a lifetime of companionship on the line – but beneath its still surfaces lies much emotional turbulence. 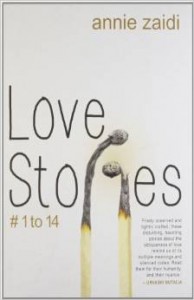 You sense this when you learn that a middle-aged woman has been taking the 8.22 train to her office even though it means a difficult commute, because she has become deeply attached to the voice of the announcer for that train (she has never seen him, but constantly imagines and re-imagines what he must look like). Or reading about the chill felt by a man alone on a beach (“the very sand seemed to turn cold at his approach”) as he watches couples walking around, a cluster of shells looking to him like “abandoned homes, tombstones without memory”. Or when a young girl ponders the meaning of the term “love child” and likens her father, returned after a long absence, to a wedding guest who isn’t particularly close to either bride or groom. (“They feel no anxiety, no envy, no real curiosity. They just sit by themselves, smile abstractly, eat and are content to have been invited.”) The tumult even cuts through the mildly comical tone of a story titled “The One that Came Limping Back”, in which a woman, after breaking off her engagement, travels in a haze from town to town while her befuddled mother pores over an atlas.

These 14 stories are about people in various stages of longing – whether framed by an actual, present relationship, or a remembered or illusory one, or one that never quite tips over into a conventional romance – and they deliver kaleidoscopic views of love and its effects. Thus, “The One that Badly Wanted” has a girl being fixated on a boy she never summons the courage to talk to, and later attempting to remake a boyfriend in the image of a dead man; the story’s final sentence is a reminder that what sometimes gets called love can be a selfish, or at least a self-replenishing, emotion. A subtler feeling stirs in “The One from Radheshyam (B) Cooperative Housing Society” when a middle-aged painter is moved by the solicitousness of an old man who she initially feared was stalking her (later, falling into a hesitant, self-conscious friendship, “they spoke staccato, like engines in very old cars”). And one of my favourite stories – the compact, skilfully constructed “The One that Climbed out of a Bucket” – has a woman experiencing a rush of memories at a most unexpected time. As she watches a gecko trapped in a bucket during her bath, one thought segues into another: she goes from reflecting on the absurdity of a typical Hindi-film scene, to thinking about cleaning the spots where the lizard has been, to recalling her own illicit presence in an ex-boyfriend’s life and house.

Elsewhere, there is the underlying knowledge that love as an ideal can be more powerful and seductive than the real thing. A man whose wife was once a narcotics addict frets that since he never knew the things she had struggled against, perhaps he didn’t really know her. A woman wonders what might happen if her husband showed up one night and “his smile wasn’t real”, a married couple finds that their eyes “no longer dance around each other”, a conversation between former lovers seems at first calm and measured, but tension builds as we realise that the two people are not carrying the same weight of emotional baggage; that one of them is more damaged than the other.

Most of these narratives are in the subjective third person, with perspectives sometimes shifting within a story, and none of the characters are named. The recurrent use of “she” and “he” might have become precious, but it works because of the universality of the feelings involved. In any case, what really matters is what is going on in these people’s inner spaces, how they are dealing with distress or elation or hopefulness; conferring superficial identities on them seems almost unnecessary. (Or even counter-productive: in “The One that was Fulfilled”, the arguments between a husband and wife run together in a single long, stream-of-consciousness paragraph, with no quote-marks or breaks to separate who is saying what, so that the effect is unnervingly like that of a single personality in conflict with itself.)

The one anomaly, I thought, was the last story, “The One that Stepped off a Broken-down Bus”, which can be viewed as a sort of summarising coda for the book. Here, two sensitive young people meet on a bus, tease each other for a bit and then discuss the complexities of love: what being connected to another life really means, what it means at different ages, practicality versus spontaneity, and so on. The story is readable enough on its own terms, but for me its weight of expository talk went against the subtler mood established by the earlier stories. That mood hinges on things being revealed through delicate observations of human behaviour in specific situations, so that – for example – a husband perplexed by his wife’s aloofness might be described thus: “He was a steady sort. He could outlast his woman’s moods, he told himself. There was the question of zero sex. But he was a patient man. He would not look at another woman. Well, perhaps he would look. But he was careful not to be caught looking. Sex, anyway, was just sex. True, it wasn’t healthy to go without for too long. But what man cheated on his wife on health grounds? He was stern with himself.”

Apart from the psychological acuity of such passages and their sense of a character’s interiority, they also let us see how, given time and a worsening state of affairs, a well-meaning person might cross a line. Consistently clear-sighted about love and its attendant frailties and pitfalls, these stories suggest many possible futures awaiting these people – so that even one that closes with “I love you, I always did, I always will” (the nearest thing the book has to a cheesy romantic declaration, spoken, ironically, by a woman who dislikes cheese) doesn’t invite the reader to take a fairy-tale ending for granted; it carries a sense that the relationship constantly needs to be worked on, that more ruptures may lie ahead. The marvel of this book is that this clear-sightedness – which could so easily have become bleak or cynical – goes hand in hand with genuine tenderness and empathy.