Anu Kumar – The Washing Machine and Other Stories

Anu Kumar writes for children as well as for older readers.  Her short stories have appeared in various magazines and anthologies. She has been twice awarded by the Commonwealth Broadcasting Association, and also short-listed by The Little Magazine. “It Takes a Murder” is her third novel for older readers after Letters for Paul (Mapin 2006) and The Dollmakers’ Island (Gyaana, 2010). She lives in Maryland in the US with her husband and daughter. The Washing Machine and Other Stories published by Kitaab, Singapore. 2015.

Of Empathy and Pathos 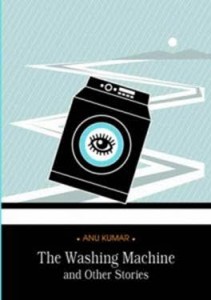 Very few writers even dare to test a reader’s credulity. Anu Kumar stretches it, almost risking collapse, in her latest collection of short stories. Packed in 128 pages are ten well-written short stories by Anu Kumar. She’s penned 19 titles, for young adults, children, and adults. I have read three of them, including two of her previous novels, Letters for Paul (Mapinlit) and It Takes a Murder(Hachette), which I reviewed here last year. This is her second collection, the first being In Search of a Raja and Other Stories, which I haven’t read so far, but plan to. Her current book is one of the first books published by an independent publishing house, Kitaab.

If one were to look closely at Kumar’s brain, I suspect, one would find inside not veins but stories creating an intricate mesh exhibiting a tremendous range of style and subject, not to mention her flirtation with genres, notably in Summer in the City,The Make-Over, and The God That Disappeared. Very few writers even dare to test a reader’s credulity; she stretches it risking collapse; she’s not afraid to be seduced by the devil of curiosity. She is equally at ease in sketching portraits with realist strokes, evoking empathy and pathos. She can as deftly make a battery-dependent Ganesha walk out of a ceremony or have a woman disappear at the top of a Ferris wheel. 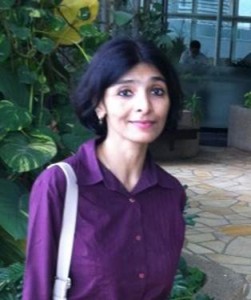 For my personal taste the following stories stand out: The Girl Who Ran Away, The Make-Over, Preparing for the Riots, and The God that Disappeared for their clear-headed focus or the sheer ingenuity of the idea without getting distracted by twists and turns. The title story is a good example of Neha, hell-bent on exercising her agency, outwitting traditions that are predominantly male-centric; giving up family support for love, only to end up realising nothing is permanent, not even love. Human desire is pitted against the unpredictability of life. ‘Preparing for the Riots’ mixes humour with ethos, humanises and satirises a young boy, manipulated by Hindu nationalism, torn between his distant manhood and civilised manners manifest in his attraction to his teacher Frieda, teaching a special class on manners and etiquettes. In a coming of age tale about the boy’s preoccupation with sexual attraction and violence, Kumar is at her best when she mixes humour with erotic.

Her skirt had briefly ridden up and he had seen her long socks, the scratchy pink of her thighs and that bit of thick lace. She wore lipstick, a bright red colour against which her teeth showed smooth polished ivory. The girls admired and hated her in turn. She was too smart, they said, and only spoke to the boys in her class.

“Yes, yes,” now his father scratched his thigh, his mouth contorted with shyness. Rambhai Gupta was a big person, he owned trucks and had links with some ministers in Delhi.
“I hope not disturbing.” And Manik stood there, mentally corrected his father’s diction, imagining the way Frieda would say it.moazzam
In the end, however, Manik forced by his father to finally become a man and is promised his own trident drops Frieda’s manner and etiquette class. The story, my favourite perhaps, ‘The Make-Over’ is a reflection of similar anxieties. It is about a woman torn between a negative self-image and a desire to be loved. Neha finally takes things into her hands, seeking out a cosmetic surgeon, who in turn is obsessed with injecting things into his body to alter a brow or a muscle to evoke response in the opposite sex. Here again, Kumar’s sense of humour is slick:
When his assistant informed him of the new patient, Dr. Desai had just injected himself. It was one of his usual experiments. From time to time, he tried new things on himself. This particular one would have a temporary effect, and give his one of his eyebrows a quirky look. That was what drove females crazy, he’d read somewhere . . . The surgeon falls in love with her, convincing her that she’s the most beautiful woman he’s ever seen. This turns into an affair and the end result is nothing short of genius. He asks her to go with him somewhere. She obliges gladly. They kiss. “Let me fix a pair of wings on you. We could fly away to our world. No one will ever find us again.”

The wings sprouted in no time. He used double doses of an injection he had. Meanwhile his long devil’s tale teasingly wrapped itself around her, bringing her close against him. The wings fluttered open and as he held her tight with his tail, they zoomed off the roof, into the warm, welcoming billowy white clouds.

And what can you say about a story where a god is bored with his worshippers and calls it quit. And as if that wasn’t enough, even has his nose — read: pride/ego — cut off!

Not to take anything away from a wonderful book, a few words of advice are in order. Some of the stories suffer from a mixing of genres. There is also a bit too much of a scientist thing going on in the stories. And while Kumar shows a range of style and topic, the flow of text is hampered by the absence of obscene language. Call it self-censorship. Every once in a while, she should run away with the foul language which must map real life characters. There are minor proof-reading glitches that could’ve been avoided.

This review was first published in TNS The News on Sunday, Lahore.  Here Is the link