Darius Cooper – The Fuss about Queens and Other Stories. Published by Om Books International, New Delhi. 2014.

Darius Cooper’s poems have appeared in journals in India and the U.S.A. He teaches courses in Literature and Film at Mesa College, San Deigo, California 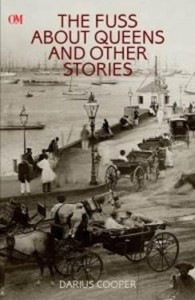 Darius Cooper’s debut collection of fiction, The Fuss about Queens and Other Stories, published three years after Beyond the Chameleon’s Skull, carries forward his engagement with the ‘epiphany’ moment, ‘that metaphorical spot’ in time which is central to his poetic sensibility. The eleven stories of varying length, ranging from the claustrophobia and rancour of middle class and lower class domestic dystopias and fractured relationships and lives to a satiric take on the genteel world of the academic and the street smart, manipulative detective (Bhagdig), are most of the time about that one single moment in which the world collapses/alters, irretrievably, for the characters involved. 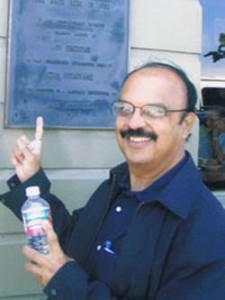 Much has been made of the Parsi-ness of the writer’s fictional world; no doubt, the ‘Parsi’ stories stand out for their distinct use of locale, imagery, language and feel. “The Fuss about Queens” itself connects to the anglophile affiliations of the community, showcased in the euphoria they feel in Queen Elizabeth II’s visit to the city of Bombay; the light-hearted, but concrete narration of the father-son differences regarding this kind of affiliation makes for much humour, while suggesting the change that is inevitable and imminent. “Pestonji’s Tower of Silence” is almost macabre in its obsession with the vivid visualization of vultures and death rites. But, it is “Says Trivikarma, ‘It’s all a Question of Height'” which acquires an almost mythic, surreal quality in the tragedy it depicts about rich boy Kersi, who has lived, enveloped in a bubble – a virtual world on the 18th floor, surrounded by TVs with their remotes, giving him a semblance of being in control over his make-believe world, while his real world shatters on the death of his father. This is the kind of story that expands beyond itself and creates for itself a life larger and fuller than what the author, perhaps, has imagined.

As in “Trivikarma…”, domestic dystopias abound, moving beyond the “Parsi” stories. So, there is Neelkantha, in the very first story “The Metaphorical Spot” who needs to slow-poison himself, because of the harsh indifference of the family; “When Still Life Still Moves” has a range of broken spirits in the family space, – an attractive woman who doubles up as a whore to fend for her marital home, the drooling father-in-law, an absent husband, a disgruntled mother-in-law, and to top it all, a 10 year old son, who has imbibed the hatred that grows in his surroundings; shocking the mother, by its sudden, unexpected manifestation. The humiliation of Anuja, and the cold, callous machinations of Siva in “His Omlette and her Tandava” point to a world in which calculated deceptions are the norm. There is a touch of tenderness, though, in “The Dance Lesson” in which the mother tawaif, initially, resents her daughter’s initiation into her profession, but on second thought, is convinced that it would be the most realistically viable choice for the child.

The warmth of relationships, sadly extinguished in many of the stories, is rekindled in the unlikely case of Vinda and Anaita in “Mouthwash”; “144, Tughlaq Kutir”, a rare story in which the political and social world form the background, is remarkable for its exploration of a daughter’s obsessive love for a father and the father’s realisation of that love in the persona of Premi. Premi, in one of the most positive steps taken by any of Cooper’s characters, gives up her plan of going to the US, to help Dada write his memoirs and the memoirs of the scattered Sindhi community in India, following the partition trauma. One hopes for and waits for the dilapidated house and its shadowy inhabitants to come to life again. Similarly, in the smartly narrated “It Takes Two to Bhagdig”, a sense of personal justice and social justice prevail in the dismissal of Percy from his service at Saklatvalla’s Library. That Bhagdig’s and Bijlikhan’s world is also an equally corrupt one, is taken with indulgence, as in true, Robin-hood tradition, they decide to steal from the libraries valued books, in the cause of the service they render to themselves and sometime to poor, helpless and dominated Parsis. There is some honesty and faith even among thieves, this story implies, in the wake of the Bhagdig-Bijlikhan ties.

However, Cooper’s stories are not only about well-constructed plots, recognition of truth, sparseness in style, angst, and living characters that grow on you. They are about Mumbai, or Bombay, as it was called once, with all its sights, sounds and smells (O dear, yes! The abounding smells, nay, stinks, indeed!) and colour, even though Raghu Rai photo on the cover shows the old world charm of Bombay in sepia tones. Often, they are about the underbelly of the worlds – Parsi or otherwise – which the characters inhabit. The tall high-rises/ mansions that are home to the Saklatvallas, Sivas (“His Omlette and her Tandava), and Kersi, are in constant danger of being invaded by the Trivikarmas, the Jankibais and Savaksas.

In his Introduction to The Fuss About Queens and Other Stories, apart from some autobiographical details, Cooper also talks about three important aspects essential to his fiction: (a) the role of epiphany in his art/craft; (b) “asking apocalyptic questions is more important than providing quintessential answers”; and (c) “some extraordinary premise or thesis” around which the tale would revolve. It is because of the careful craftsmanship that the some of the important stories evolve into tales that can be read again and again, that “there is always something new that is added and pondered over and shared, lovingly and willingly”. This, in spite of the relentless bitterness that pervades the world he depicts, in spite of the fact that many of his characters are lost in a hell from which there is no exit; drinking in the slow poison that Neelkantha takes in, reminiscent of the other Neelkantha of ancient lore in India. If the purpose of good writing is to disturb and shake up comfortably ensconced notions, then, Darius Cooper’s writing, thoughtful and crisp as it is, shall not be found wanting.