Keki N. Daruwalla-Islands; A House in Ranikhet; The Minister for Permanent Unrest and Other Stories

Keki N. Daruwalla, a retired police officer is a poet and a short story writer

Man, An Island Unto Himself 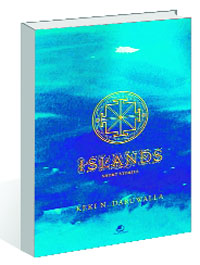 AN island captivates, conjuring images of solitude; of a lonely landmass holding on its own amid the stretching expanse of a water sheet; of hope; of challenges; of anchor and moorings. Presenting an evocative collection of short stories revolving around islands, Keki Daruwalla transports the reader to the realm of magic, where the breeze smells of sea and salt. The islands are disconcerting, uplifting, liberating and prod a soul-search. These are every man’s stories of frailties and vulnerabilities; stories that inspire and cause despair.

While a holy man, around whom people of faith gather for peace, finds nirvana in a flooded river in Island Sermon, Grotto exposes pseudo religious beliefs, born of ominous manifestation of miracles and apparent lack of conviction that is easily swayed and as easily awakened among “bystanders, the twiddlers of thumbs and scratchers of backsides, a class to which a major part of humanity belong”. The sarcasm is not lost in the observation of the bureaucracy, which is good at “making you fill forms and sign in forty places”. Belief is discarded and regained with impressive alacrity.

“Island at the edge of the current” becomes a symbol of finding one’s true self in the quiet of nature, in sync with the spirit world. The broken heart of a grieving young mother comes to terms with her loss. The president of an island in Amphibious Train is firm on bringing a rail track to the island amid opposition from the natives. Rumours — “the most dangerous underground thing apart from earthquake tremors” — abound about the motive, splitting protesters into two groups, which is a “mainland sickness”. What is true, what is false; what is real and what perceived? The ambiguity of human nature, the inconsistencies and the emotional and communication void makes this tale one of the best.

The loneliness of a soul, condemned to hide, makes The Yeti a compulsive read. The Yeti must never be seen, warns his mother, or he would be hunted. But he has no reason to fear an Indian journalist, for “a half-bottle of booze is good enough to ambush the bugger”. The silence around him has been older than permafrost. His last cry is a reaffirmation that the unknown can never become extinct, as a blizzard obliterates him in the real world. The desperate search for the fountain of virility will take man to distant islands, even if ephemeral, in “The Meditation Cave and Amnesia Yoga“.

Daruwalla is a gifted writer. He has in his kitty the Sahitya Akademi Award for poetry and the Commonwealth Poetry Prize for Asia. His latest poetical endeavour is, Fire Altar. His short stories, too, flow like poetry.

” The island functions as a sort of leitmotif, a thread that sews these 16 stories together. As one leaps from story to story, the larger ocean emerges” K. Srilata. -http://www.thehindu.com/books/literary-review/islands-book-review/article6842122.ece

A House in Ranikhet

The short story is the domain of meticulous craft, and it is left to one of our most accomplished poets to prove his mastery over this demanding form. Keki N. Daruwalla’s third volume of short fiction, A House in Ranikhet, has 16 stories, many of which have overlapping locales and characters.

Written between 1996 and 2003, the stories leap from irony to high comedy and from nostalgia to acerbic historic visions. At first, one encounters a deceptive sense of ease, the comfort of a good yarn. There is a lulling reassurance in the lightness of the prose, the understatements and the complete control of the style.

But of course, this is only a cover for the fine game of cat-and-mouse deception that Daruwalla plays with his reader. Nothing is as it seems: the confusions, ambiguities and misunderstandings of life itself reign over this crafted simulation.

Disconcerted, the reader may search for an authorial point of view, a cue, to ease him along. But Daruwalla studiously disdains such props. Reading these stories is as demanding a process as reading fine poetry: it is finally up to the reader to make sense of it. The first story “Going” is an ode to things unkempt yet not gone to seed.

A sense of loss is a constant in this volume and the directness and unsentimentality of its perception have all the clarity of poetry. The stories that constitute A House in Ranikhet are interlinked by strange and erratic narrative compulsions.

The karmic destiny and random coincidences that bind the lives of Mrs Ganguly, Cynthia Craig, Freny Batlibhoy and the wily Tripathiji are balanced by a multilayered understanding of the consequences and interaction of characters with class and society.

The storyline progresses in the whimsical adventures of the “history professor” Dhansijah of SOAS and the illogical come-uppance of Dr Gurmeet Singh Gill. With the finely honed irreverence of Parsi literature, Daruwalla celebrates the comic abundance of our multicultural intolerances: “It is the Buddhists, indigenous though they were, who betrayed the nation.

That wretched Asoka spoilt it by embracing Buddhism. Otherwise, the Biharis would have kept thrashing the Oriyas, as they rightly did at Kalinga, and everything would have been hunky dory. Now we were in this historical mess, this pot of glue, this jam-jar infected with leftist flies.

This pocked hide as warm with secular fleas … ” The disingenuous discourse continues through the parable of Michel Raynal with its detached metaphysical analysis. It is the historical pieces that are the crowning glory of Daruwalla’s style. “Trojan Horse”, “Islands”, “The Ford” and “The Yavana Cometh” carry a precise historical vision along with dire contemporary prophecy, culminating often in “hubris and divine wrath and heroes foredoomed”.

The Minister for Permanent Unrest and Other Stories

I thought I knew what I was in for in reading a book by a retired police officer and intelligence man—cops, robbers and cross-border intrigues, drug cartels, hawala rackets and undertrials being systematically deboned in provincial lockups. If Keki Daruwalla was in a satiric mood perhaps a moll or two; if pedantically political, a few Joginder Singh types as well as some high-level cock-ups in the Home Ministry and Intelligence Bureau.

But poets just won’t give critics a break.

Many of Daruwalla’s short stories turn out to be about in-laws rather than outlaws. Even in the most obviously political story, set in an imaginary Latin American dictatorship, the action only gets going when the Chief Censor (“You are my Minister for Permanent Unrest,” says the President) encounters two old chums at his in-laws’ house.

In a book of several winning surprises this is the strangest, most remarkable work, not least because it is uncertain whether Daruwalla has ever been to South America. If he hasn’t, it is proof of Oscar Wilde’s aphorism that you don’t have to go to Japan to write about Japan; you can imagine it sitting on a bench in Hyde Park. It is not the ironic coup de grace (will wearing a bullet-proof jacket during a political assassination save or condemn you?) that is as unusual as the atmosphere Daruwalla conjures up of a society in a dictator’s grip, riddled with underground revolt, religious ferment and ecological disaster—where “the sea is dark as a solid, the hinterland dark with rumour”.

That kind of poetic line, perfectly balanced in symmetry and metre, illuminates Daruwalla’s prose which can, in a couple of sentences, capture the essence of place and time. Consider the opening lines of And On You Also be Peace: “Mirza Koocha was the kind of place where people replaced the wrought-iron grills of their balconies with material made of packing cases; where the cotton bow twanged in the morning as people brought out their old quilts and mattresses and got them redone… It was the kind of place where a retired schoolmaster passed all his mornings in a neighbour’s veranda reading newspapers.”

The stories, clearly written over a passage of decades, reveal Daruwalla’s love of medieval history, knowledge of Sufi mysticism, Persian poetry and observation of social nuance. In Of Abdul Qasim, he takes you into the mind of a Sultanate emperor; in The Owlet Beats the Drum he embodies the convulsive schisms of 13th century Islam as a battle between religious dogma and earthly desire raging in the person of the heretic-saint of the vanished city of Saqsin in Arabia.

But Daruwalla’s poetic sensibility sometimes tends to become a disability. Because the crisis in many of the stories peters out before it develops, the characters and situations have no dramatic centre. But where Daruwalla succeeds in bringing matters to a head, as in A Plague of a Hundred Volds or The Potting of the White, the characters acquire surprising conviction and inject new life into the yarns.

Still, a basic question needs asking at the end of Daruwalla’s book. Does shorter fiction have a future in our time, other than being read by a few critics or selling a few thousand copies before it disappears into the black hole of remaindered copies?

Of course it does. Many of the stories here are readymade for intelligent, sensitively-produced television drama. But one of the monumental failures of Indian television is that it has sadly neglected drama. In the proliferating miasma of television trash, no less dictatorial or stifling than the allegorical tyrannies that are described in The Minister for Permanent Unrest, it is worth saluting the few writers and publishers such as Keki Daruwalla and Ravi Dayal who soldier on regardless.