Kulpreet Yadav has joined the ranks of Chetan Bhagat and Amish Tripathi as a best seller. His latest Novel Catching the Departed hit the #1 spot on Amazon in the Crime, Thriller and Mystery category and remained there for a number of months. Earlier it was short-listed by Hachette-DNA in the “Hunt for the Next Bestseller Contest” in 2014. His first novel, The Bet(2006) was optioned by a movie producer. Indian Unlimited-Stories from a Nation caught between Hype and Hope is his first collection of short stories. One of the stories in this collection won a Special Commendation in “The Best Short Writing in the World” by Fleeting Books, UK.He is the founder of the Open Road Review e-journal. 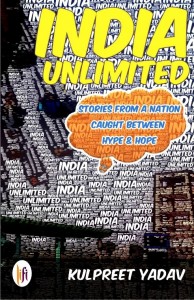 The Indian phenomenon is capturing everyone’s attention from businessmen to Hollywood stars. The nation that was once home to the greatest ancient civilizations is now the world’s largest democracy. But how real is the Indian story on the ground? INDIA UNLIMITED is an attempt to lay bare the lives of people and their surroundings that define an ambivalent India trapped between hype and hope.

India Unlimited. Written over the last decade, these stories are set in villages, towns and metro cities of a country under overhaul. It’s an attempt to depict pain, pleasures and prejudices of everyday Indians as they adjust to the change that fate has thrust upon them. Inspired by real life incidents this collection slides through various themes like appalling lives of street children, new perceptions about love and sex, urban disorder, influence of western values, depraved spiritual gurus etc. 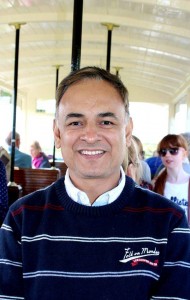 India Unlimited is a collection of 31 short stories. I have been quite a fan of short stories myself because while dealing with them you can’t beat about the bush and only an effective writer can develop the characters and the plot within that constraint.

Coming to the book, the stories have been set against different backgrounds and give you an insight into our country which is well known for its diversity. The book is a brilliant attempt to capture the strikingly different moods of a nation which oscillates between ancient values and modern luxuries.

The stories explore various human emotions inter alia greed, love, fear and innocence. The writing is crisp and the narration sublime. The author effortlessly switches from one mood to another as the stories progress. Also, each story is supported by a wonderfully depicted background. You can easily relate to the protagonists, be they be  a peanut seller, a beggar, or long lost lovers.

Some of the stories touch your heart, some take you back to your childhood days, some make you chuckle, and some make you ponder. The ease with which the author has dealt with so many genres is really commendable. Most of the narratives have a dramatic twist at the end. The 31 titles have been wisely chosen

There were some stories which I liked better than the others; my personal favourites include:

This book is a refreshing change from the clichéd light reading which are flooding the market these days. Most of the collections in this anthology have already been published in well known literary magazines. I can easily say that this is the one of the best books by an Indian author in the recent times. I hope we come across more such works in future.

Unlimited Stories of the Indian Soul

Kulpreet’s writings always give that realistic appeal to things without becoming cynical. In fact, having read his work before, I could detect the same cozy feel that the author brings to his characters. Here, despite the fact that this book of stories has innumerable characters, the readers are able to slip into the skin of most of them. Due credit must be given to the language, narration and observation skills of the author.

“The outside is as alive as it could be on this typical summer day in June. I watch lives that pass by in the narrow lane: a buffalo, a rickshaw, a woman in a burqa who walks like a man and I have no way of knowing if there indeed is a man in it, two giggling teenage girls followed by a teenage boy on a 100cc motorcycle, a pig with about a dozen piglets in tow.  I know I can’t risk being less interested in the shopping we are here for, so I quickly return my attention back to the sarees.”

Tales like ‘Not The Only Peanut Seller Who Hasn’t Heard Of Osama Bin Laden’ and ‘A Familiar Stranger’ are narrated simply and you know that yes, you have seen people like these in your life too. ‘The Beautiful People’ and ‘Bringing Sunset Home’ are some other stories that are moving and touch the heart within.  In between, nature and the environment are described aptly and beautifully.

“The sun looks tired, hanging dopily over the tiny village precariously perched on a mountain slope.”

How often we have seen the sun like that but it takes a Kulpreet to describe it so!

“Water invaded everyone’s lives. Schools were shut down, giving children a chance to splash collected rain water by jumping in the puddles. Traffic crawled on the roads like depressed insects queuing in their long pursuit to their destinations where perhaps food waited, a stinking odour swam around everywhere from the rotting garbage islands like pheromones seeking more garbage. Frogs, centipedes and millipedes and sometimes even snakes began appearing in houses like unwanted guests. And my favourite leather belt and shoe began to grow fungus on it.”

This description of the monsoon season is just so apt. All of what Kulpreet has mentioned we all must have experienced some time or the other in our lives. That’s what makes the connection with the stories in India Unlimited all the more intimate.

Abstract images, natural human fears, poverty, sloth, deceit, desire – all figure in the stories that seem to have been taken from the lives of people all over the country. India Unlimited is a beautiful read. It is representative of the lives of the ‘aam aadmi.’

“The best part that I loved about the author is his versatile writing style. Most authors write amazing stories, beyond imagination but when a collection of such stories is published, after first four chapters the reader understands the writers style and pattern of plot. However, Kulpreet Yadav has done an amazing and difficult job of writing plots differently for each story” – http://musenmotivation.wordpress.com/2013/05/07/unlimited-stories-of-the-indian-soul-a-book-review/

“A superb depiction of the optimistic and eternal riddle called India… an amazing set of tales that really widen the limits of the acuity of our nation to infinite unexplored terrains” –  http://bookmarkks.blogspot.com/2013/10/india-unlimited-kulpreet-yadav-book.html

” Kulpreet Yadav has pushed the boundaries to bring to us 31 of the most amazing short stories ever. It is honestly mind blowing how such diverse, acutely unrelated stories could be penned down by the same hand. Link à http://indianfusion.aglasem.com/47694/india-unlimited-kulpreet-yadav-book-review/#sthash.Zlbjzbh8.jyFJHidd.dpuf

“The character sketches are  brilliantly done, and there’s a slight hue of ‘someone among you’ that’s present in almost every character”. –  http://indiannerve.com/india-unlimited-kulpreet-yadav-book-review-87675-11646/

“The settings and the background are beautifully depicted… the portrayal of characters, their actions, the surroundings are adorned with pleasing descriptions. The different story titles are interesting and catchy, not cliched, in fact, they urge us to read on” – http://manjulikapramod.com/2013/03/30/india-unlimited-by-kulpreet-yadav/

“With his keen annotations on daily life, Kulpreet Yadav presents a set of fictions to cherish. You will adore a character, detest another, love a story, and dislike another but India Unlimited will adroitly hang about with you and you will pick it up again for an unlimited passage of the both known and unknown India.” –http://namrota.blogspot.in/2013/10/india-unlimited-by-kulpreet-yadav-review.html

“India Unlimited is a treasure of 31 short stories that introduces you with hype and hopes of this nation that is called India and sometimes “Bharat” or “Hindustan” vice versa. So, it fills you with great joy and mesmerizing stories while you travel to office to come back to home.” – https://huesofasoul.wordpress.com/2014/01/01/book-review-india-unlimited-by-kulpreet-yadav/