Doppelganger is an endearing, heartwarming collection of 18 short stories woven around the titled theme of the alter ego, or in other words, the “double” 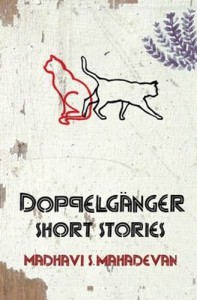 Doppelganger is an endearing, heartwarming collection of 18 short stories woven around the titled theme of the alter ego, or the “double” in the other. Wafer-thin surfaces are peeled away from a number of miscellaneous people who seem to have wandered into the book to reveal what lies underneath — seething, happy, sad, insecure, smoldering, bewildered characters.

The narratives appear closer to comedies of manners, or domestic dramas of sorts. The stories are mostly about urban, middle or upper class people. Some of them have floated up from the lower strata, or moved from rural areas. There is no sociological exploration, only psychological and attitudinal studies. Hence, the stories are a gallery of the kind of people you run into in life’s parade. They include successful businessmen, failed wannabes, aspirants, housewives or hopeless people in the middle of nowhere.  Then there are people in love, rejects from affairs, simple husbands, smart wives, scheming adulteresses, cunning game-changers, cougar relationships, self-centered children and neglected parents 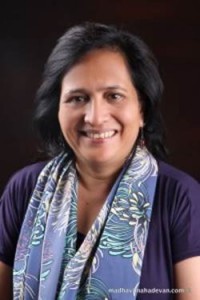 The families are expanding, more often, breaking up, splintering and dividing in a world that has changed its contours and personality. There are characters who are struggling to hold on to their identities. The author gives some plots a few twists and intersecting points that reveal their complications. All the stories have certain set themes, but all weave the threads together.  The first story, ‘Doppelganger’, is about two friends who share similarities in their names, but are foils to each other. One of them is diligent, successful and ambitious, but he is seething with loneliness and a sense of failure inside. The other is laid-back and unable to taste the success he longs for. Some tales show characters caught in some suddenly complex turns of events. These are stories with unusual plotlines.

Thus, ‘Begum Sahiba’ is about an upwardly mobile woman who fools a lot of people by putting on the airs of a rich lady. Her personality is pieced together by different characters who comment on her. These comments build up her immensely interesting façade. Her personal point of view, however, remains elusive.

A ghost story called ‘Chloe’ merges the divergent worlds of reality and imagination. ‘One Last Song’ sings about a wife with a migraine attack, a person pitted against a dumb and dense husband. ‘Faultlines’ is a tragic quadrangle of cross-wired lovers, who haven’t patched up in spite of the passage of time. ‘Love Notes’ is about the descendant of an unfortunate woman; misfortune is her ancestral legacy.

All the characters are caught in the web of complicated problems. They are found musing, reflecting, remembering or coming to conclusions about relationships. Some of them are dense and unable to grasp the realities of life, while others are able to empathize with others. What makes the tales memorable is the author’s study of the facets of life. “I feel sad for us, our tired, outworn selves. At the same time, I feel, strangely, relieved…In the warmth of that light the past suddenly seems very distant.”  The language, though simple is rich in metaphors. Sometimes, the descriptions seem almost staccato. Yet the prose flows, capturing the rhythms and idioms of everyday sights, smells and sounds.

Most of the tales swim on the gossamer surface of life. They seem to mirror the reality of the public tableaux, in which the subjects just skim the surface and then move away, suddenly showing some flashes of deep insight. The stories give the impression of a slight breeze that ripples over a smooth surface of water yet stirs up movement under the surface. The movement is not strong enough to change the superstructure in a major way.  For instance: “All of us emerge from the same alphabet soup, but our nakedness cannot remain uncovered. So we clothe ourselves in different names: chaste/unchaste; wife/whore; licit/illicit. How else can distinctions be made? Words are how we map ourselves, yet words are treacherous.”

“Love makes a child, while forbidden love begets a love child.” The tales create gentle, fragile, will-o’-the-wisps that rock and float gently, while, at the same time, revealing some shining nuggets of secret relationships.

Madhavi S. Mahadevan is to be complimented for making a creative and artistic use of an interesting phenomenon.

Extracts from an interview given by Madhavi Mahadevan

“ It took me almost a year to write the 18 short stories that make up this book. A short story takes up more effort and time than a novel. It is important to ensure that you are able to get your message out within a set number of words.”

“It is a series of takes on different aspects of life in urban India. I have always felt that with our rich story- telling culture, India is the land of short stories and story tellers”

“Though these stories are fiction, there are elements of reality in them. These tales are located on the cusp of reality and fiction. My writing is inspired to a large extent by the people I meet and interact with on a daily basis and their stories.”

“As we are getting more busy with our lives, reading short stories is a good stress buster.”

Editor’s note: According to legend, doppelgangers (German for “double-walker”) are paranormal duplicates of a real person. They can manifest in a number of ways: You can see them out of the corner of your eye, meet them on a lonely road somewhere, or, chillingly, see them standing behind you when looking in a mirror. Sometimes a doppelganger can’t be seen by the person at all, but instead manifests to other people in a completely different location. It may even cooperate with the person, help them with tasks, or act as a surrogate body of sorts.
There are many explanations for the doppelganger phenomenon. Mystics throughout the ages have believed they are supernatural creatures: either spiritual copies of the person or downright demonic twins. Meanwhile, scientists say they’re just electrical glitches of the brain, or mental illnesses such as schizophrenia.

Hold on to your berets, here is another intriguing collection by Madhavi 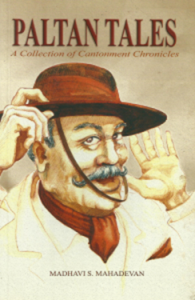 Paltan Tales is a set of 13 stories; the sub-title, ‘Cantonment Chronicles,’ says it all. The author has managed to cover all manner of military hierarchy and landscape in the book.

Her voice is a rich and gender-neutral one. It is also an authentic one. Madhavi Mahadevan, an army child, soaked up cantonment life and spent her early years following the drum. That is why she is able to tell the stories of a cross-section of people– army wives, parents, loyal batmen, soldiers in the field, young cadets and even the odd Major General.  The tales describe the army experience from their point of view. Tales that describe the pride, honor, self-respect, discipline and sense of duty of the men in uniform, and the anguish, frustration, and quiet resignation of their loved ones. Each has a distinct flavor; some are somber but the common thread of Corps spirit runs through all..

In stories like ‘Annual Leave’, the army simmers somewhere in the background while the lives of the protagonists are played out in a more civilian set-up.

Others, like ‘The Mascot’ are Olive Green all the way. Two brothers recall a story told to them by their father’s batman years ago. How they react to the story– which incidentally is a truly heartwarming one– serves to highlight the innate difference between the two. One brother joins the army and inherits its rich traditions, the other (unabashedly civilian) looks upon them as quaint but redundant.

The last story in the book is about retirement and the sense of ‘unbelonging’ that every soldier feels at leaving the army. The only identity of a fauji is his uniform. It is what roots him to himself in many ways. This angst is captured in a subtle and gently ironic way by the author in ‘Rebirth’.

This book may be likened to a river where the brooks of many lives join and flow in the same direction– ‘for men may come and men may go, but the Paltan goes on forever’ Deeply felt, touchingly told, by someone who knows.