Nabina Das – The House of Twining Roses: Stories of the Mapped and Unmapped

Reviews of The House of Twining Roses: Stories of the Mapped and Unmapped by Nabina Das, published in 2014 by Lifi Publications

Nabina Das is a prize-winning poet, novelist, a short story writer besides being a theater personality and a musician trained in Indian classical music. She is a 2007 Joan Jakobson fiction scholar from Wesleyan Writers’ Conference, and a 2007 Julio Lobo fiction scholar from Lesley Writers’ Conference. The House of Twinning Roses is her first collection of short stories

Nabina Das’s collection of short stories ” The House Of Twining Roses” are a compendium of delight. Read carefully they collectively speak on personal and communal histories. In fact history seeps through the arcade of these delectable stories, whether it be the partition of the country, the Assam Agitation or the horrors of 11.9.2001. In between are stories weaving around families, friends, the mother son relationship, the passion for music in a child etc. There is an ‘ obsession ‘ if one might call it with houses. How is a house the signifier of change, or a fleeting impermanence? At least there are three stories intricately woven around this theme. Then again there is the frenetic Hindu- Muslim question or identity. Nabina’s stories also speak of the diasporic Indian, the innocence of childhood as in one of the stories, the little girl watches a terrorist leave a bag, and innocently tells him that he has forgotten it- which leads to her mother’s grisly death. Violence or impending violence short circuit her stories with implosion, reminding us that this is universal. It recalls history- the partition of Bengal, it obliterates relationships, as in the last story on the WTC attack. 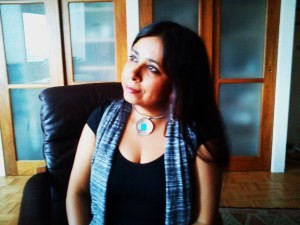 Although the stories are racy narratives, time stops in them, as in the title story ” The House Of Twining Roses” where this little girl’s passion for music, embodied in the harmonium, makes the narrative come to a grinding halt, especially at the end when she ‘ steals ‘ a harmonium at the end of a musical show. The Hindu Muslim relationship in India is evinced in one of the stories, through its protagonist Atif, who is born Muslim but adopted by a Hindu bonded labourer. Atif is shunned because he is a Muslim and also because he has been brought up by a ‘ low caste’. In any ways these stories are societal reflections with history charting out their course. The narratives are subtle, humorous, and not overtly sentimental. She avoids the mawkishly sentimental or maudlin stuff. They are real, yet their realities are infused with human foibles, such as greed. The stories are set in Assam, Bengal, other part of the country or the world. This invests them with both regional and national identities.

There is an anthropomorphic awareness in thee stories as ‘ life ‘ breathes through inanimate things, the flowers or the stones, or the house, the roses, the harmonium etc.

Yet there is pathos in these stories, whether it be a mother pining away for her truant son now abroad, or Atif trying to come to terms with his moral self and his existential predicaments. The dissembling leftist’s story is another one which speaks of a moral worth or for that matter the story of a charlatan, discovered only on his death bed, as in momentary act of self confession he regurgitates all about himself, how he made money and lived in short a pretty bohemian life, at the same time spouting idealistic ‘ values ‘.

The stories are marked by brevity, wit and dialogue. They are not complex interventions of ‘ techniques’ out to befuddle a reader. But they seriously engage the reader with history and moral questions, in a loose world of immorality or, an amoral world. Who is responsible for all this violence? We do not know, or we do not care to know! Their perpetrators are ‘ terrorists’ or simply ‘ they’. However, in the process the innocence of a child is sullied, or inter personal relationships broken, beyond repair The story of Amala: ” Women: Two Lives” is a scorching example of this. She is compelled to leave behind her best friend, a Muslim girl in undivided Bengal. What are relationships in the face of existential truths, over which we have
little or no control? Or, what are relationships against the juxtaposition of history?

The short story as a literary genre is not susceptible to a closed ending. A short story is a fragment- of life. These stories leave you with disturbing question marks, but not till you have deliriously
enjoyed each and every one of them. This is a very compelling and authentic collection, written in a very free flowing and transparent style.

This book is a collection of seventeen stories told by Nabina Das. It begins with a foreword by one of my favourite authors- Ashok Banker whose books on mythology, particularly Krishna Coriolis and Ramayana series I’ve relished greatly for their fresh take and narrative style. Nabina Das’ stories are wrapped inside a picture of the house of twining roses; there is a nice story with this title. The story names suggest that they are not the five-minute urgent reads that are read by the coffee table and forgotten before the steam in the coffee runs out. So I had to pick the book when there  was enough time on hand to let the effort of fine story-telling trickle down to me, else no justice that to both.

There is no hurry in the narration, no desperation to make the stories extra intense by drawing in heavy words or emotions. The narration is objective throughout and deceptively lucid;deceptively because the objectivity and simplicity with which the stories are told: matter-of-factly, leaves it to the reader to feel its depth and intensity according to the capacity to connect with the situations and events in the stories. They in a way test your compassion and limits of stretching your horizon as a reader of classy stories. I say this because so much passes off as short fiction because of the versatility this genre offers; the parameters generally followed seem to be quirk, length, mass appeal and abstractness. Personally I enjoy depth, character sketching, freshness in presentation and maturity in handling sensitive subjects. There is boldness in this collection which breaks all the myths that float around about the short story genre, myths about the lengths or about covering a good amount of time period or having too many characters or no clear protagonist or antagonist as such.

The stories at times capture leaps in time period, at times have many interesting characters and there are stories where you cannot tag anyone or anything as central. The stories are so enjoyable because I got lost in the genuine intention why the stories are told. They needed to be shared and weren’t written to impress upon the reader. I sincerely feel that there should be a genre by the name ‘stories for the mature’ or ‘stories for the thinking mind’ or some such genre under which this book will certainly feature along with its predecessors and successors. Is it not fair enough when we see ‘all’ short fiction in the same bracket? In The house of twining roses there is an underlying gravity that can be totally left unfelt if one cannot read between the simple lines.

The characters from the book cease to stay locked inside the house of twining roses once read. They follow you- Kartik and his mother, Kon Moni, Atif—enigmatic characters, superficially mundane in the narration! Darya and Ken of ‘Waterborne’ are two characters that are sketched wonderfully, the complex Darya and the honest Ken who reveal two extremities of human nature. Darya comes across as someone who is unaware of her own complex nature, added to which is the complexity of her life. Ken who likes everything straight and simple is taken aback by such intricately woven relationships in Darya’s life that he chooses to leave her alone and go ahead with his easy life; that he gets the feeling of being in a no man’s land is the result of his own nature.  I could write so much more about this story but it would be a spoiler for those who haven’t read this book. The author has revealed just the right amount of traits of her nuanced characters that one wishes in the end to know more about each one of them. If this is a mastery of the craft of story- telling then it is worth emulating, if it’s a natural gift then it’s worth a thunderous applause.

Waterborne, About Aribam, The house of forgotten youth and After the music stopped are the ones that left the most impact on me in that order. I felt like I was ambling along a story street where the stories are set in detailed descriptions of places and events.  It’s a collection to be read and owned.

“(Her) stories are set in the North-East of India” – Kulpreet Yadav  http://openroadreview.in/interview-nabina-das-kulpreet-yadav/