THE WORKINGS OF THE TEENAGE MIND 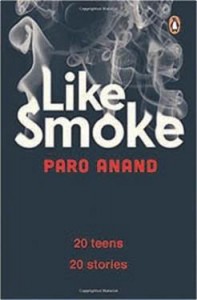 Ask any schoolteacher about her class of adolescents and more often than not you are likely to hear exasperated sighs of resignation.

A species quite intractable to counsel, they can send you scurrying for the latest self-help books. In Paro Anand’s book, Like Smoke, you are introduced to 20 teens in 20 separate stories. You have the problem child, the emotional child, the obstinate child, the grieving child, the prejudiced child and many more.

The shared experiences of teenagers, their prejudices and resolution are predominant themes in the stories.For example the first story Those Yellow Flowers of August deals with a teenage girl’s hatred for Muslims because she loses her father in a bomb blast. She believes all Muslims are perpetrators of violence and such thought processes holds back any possibility of amity on her part for the community.

Another story, This Is Shabir Khan, lays bare the plight of orphans of militancy in Kashmir and how two communities are compelled to co-exist though grudgingly. This gives rise to a tirade of blame game and at the same time bewilderment, anxiety and the need to belong.

Eid focuses on the turmoil of a boy who bears the brunt of his classmates’ ire just because he is a Muslim or ‘Mossie’ in their words. Traitor, gadar, khalnayak are few of the monikers, his classmates fling at him in callous spite. How Ayub becomes conscious of his Muslim identity and how his parents help him reconcile with the same forms the thrust of the story.

For many sports can be liberating and this is another recurrent theme in a few of the stories.In See you Shortly, two friends Anamika and Anita get around to playing basketball even though their coach insists that someone as short as Anita is not fit for the same. This does not deter the girls though, and the friends come up with a working plan to not only defy the odds, but also stun their coach into acceptance.

They called her Fats is the story of Fatima Whitbread who went to win Olympic bronze and silver medal and later, in 1987, the World Championship in the field of javelin throw. http://4.bp.blogspot.com/-ij5MFeSWv6E/VqXxM1IcXoI/AAAAAAAADe8/tYNWKM6nuQE/s1600/paro%2Banand.jpg

Fatima emerges from being a sulky, dour, highly disliked loner to a great champion. Her nightmare of a childhood is turned around when her coach and adoptive mother observes her predilection for javelin throw.

In Jason Jamison and I, two boys are brought together or rather pitted against each other by tennis. However, being competitors does not necessarily mean antagonism and soon the two boys have personal moments where each opens up to the other. Finally, they cement their friendship by agreeing to join hands for the doubles match.
Anand also touches upon the teen pains of being brought up in disturbed household, the fear of divorce, their kinship for animals, among others.

In a lighter vein Susu attempts to evoke the humour arising out of being in a different land and learning a new language. Anand keeps the language simple and, in fact, repeatedly uses their parlance to talk to them. The language lacks sophistication, poetry and is peppered with Indianese (your typical Indian English). Let’s say it’s a book exclusively written keeping teenagers in mind. Adults have no business here.

The review appeared in The Asian Age. Here is the link: http://www.asianage.com/book-reviews/workings-teenage-mind-719