RK Biswas – Breasts and Other Afflictions of Women

RK Biswas, a former advertising professional is a writer and a poet whose work has been featured in more than 200 publications including Per Contra (USA) Markings (Scotland), Mascara Literary Review (Australia) to mention few. In 2012, Biswas was the first prize winner at the Anam Cara Writer’s Retreat Short Story Contest. Her first novel, ‘Culling Mynahs and Crows,’ was listed among 20 popular books published last year.  ‘Breasts and Other Afflictions of Women,’ is her second published book. She also blogs at http://www.rumjhumkbiswas.wordpress.com.

An anthology that sparkles with brilliance

Who can understand a woman better than another woman? 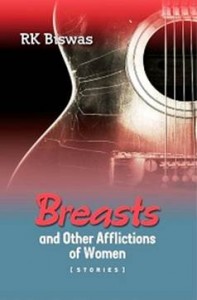 RK Biswas’s Breasts and Other Afflictions of Women, a collection of short stories is ample testimony to this. Comprising of 32 stories that have been published individually in India and globally, the book dwells on women from different walks of life, cuts across ages and brings out the resilience which women are known for. This mixed bag of stories opens with a sensitive story told most beautifully in “Breasts”. A simple phone call in the dead of the night can be ominous and when Ila learns that it is a perverted prankster at the other end of the line, she disconnects the line with just a word, ‘Idiot’. As the story progresses, Biswas brilliantly changes Ila’s mood into a tender moment. This poignant story is my favorite. 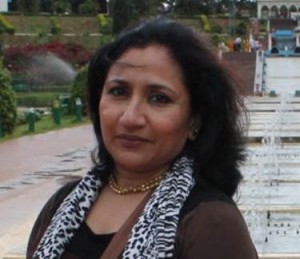 Can a story be woven around an ordinary meal of boiled rice and salt? Biswas whets the appetite of not only her readers, but that of little Khokon too in “Feast for a Prince”. Her detailed description of a little boy’s lunch conjures up images of a royal feast while a poor widow savors life’s frugal moments of joy with her little child.  This story is bound to remain long in the minds of readers. “Keeper of Cats”, is a humorous take on life in a girls’ hostel. But is there all that is to it? Ask Binapani Das, the hostel warden in the story who is often the butt of jokes. Biswas reveals a caring side of this Mashima (“aunt”, as she is fondly called) who comes to the timely rescue of the girls.

Taking a dig at those respectable Indian woman who are governed completely by their husbands, is ‘Spam Mails”, written with tongue-in-cheek humour. Mid-life crisis and the forty-year-old itch is dealt with in ‘Marital Bliss”, when Tara’s marriage feels a slight tremor after her daughter’s friend, Prema, comes visiting. In “Breakfast for Two”, Biswas spins her tale around a couple who seem to have quarreled the night before. Do they get back together? This forms the rest of the story.

Childhood years are indeed nostalgic, but when pricked with guilt, Arunmayi returns to her ancestral home to make amends with her playmate in ‘Princess Esmeralda’s Smile”, a tale that many of us will easily connect to. Talking of a child’s companion brings to mind another moving story, “Playmate.”

Biswas’s stories carry an emotional appeal with a distinct local flavor and reveals her excellent command over the language. Sample a few lines picked out from different stories of this collection.

He pours over his morning paper. She pours out his tea. He takes the cup. She takes a quick bite of her smaller portion. His eyes graze hers. Their breaths hang together, frozen between them.(“Breakfast for Two”)

Her laughter rang out in soft peals like a shower of silver coins in moonlight. (“Breasts”)

The wind gathers in her white folds to listen. (“Feast For a Prince”)

The ring seemed to float before her, and through its hole she could see the length of her life that pushed far behind her now, like the ash-end of a smoked out, burnt to ashes cigar. (“Lid Banged Shut”)

Do check out the poem, “Gut Word” in “Word Among Poets.”  It’s not mere mastery over words but is hilarious too.

After transporting readers to life in Bengal, be it in “Mother’s Garden”, or “Sunset in the Hills”, and “Playmate”, you are flown on the wings of fancy to Singapore in “Sexless in Singapore”  and “Tall Girl in the Rain”.  And, before you wonder–where next?–Biswas lands you in a South Indian city with “The Amma who took French Leave”.  Written in simple prose, sometimes in first person and other times in third person, Biswas’s characters are neatly sketched. Carved with immense love, she has marked each one with a distinctive trait and individuality. Readers cannot forget them and you might even look out for them in life around you.

Each autonomous story has a finality to it, often taking a completely different note to how it began from. If Biswas shocks you as she wrapped up the story about a mother’s extravagant life style in “Maternal Instincts”,  she leaves you in guffaws with “Word Among Poets”.  She prods you to ponder over Josephine and Marie in “Lid Banged Shut”, while “Sweet Surprise” is not just a tale of an exotic dessert.