Rajesh Parameswaran – I Am An Executioner

Lovers, elephants and other aliens: on Rajesh Parameswaran’s I am an Executioner; reviewed in 2013

When I first read Rajesh Parameswaran’s “The Infamous Bengal Ming” in the Granta Horror special, I was only moderately impressed. The story, told in the voice of a tiger living in a zoo, was unsettling in places but felt a little trite overall, and it sat uneasily in that anthology. But encountering it again in Parameswaran’s own collection I am an Executioner was a revelation. When you read his pieces in succession, noting the subtle ways in which they play off each other, what emerges is a distinct sensibility and storytelling flair. 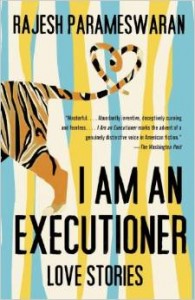 These are all – to different degrees – teasingly self-reflexive narratives. The mysterious “Four Rajeshes”, for example, is apparently told in the voice of an early 20th century station manager named P Rajarajeshwaran Iyer, but soon we realise that this voice has been imagined into existence by another, contemporary Rajesh. Further, not only does the modern Rajesh make up the earlier Rajesh’s story, he also imagines his subject occasionally chastising him for getting his voice wrong, so that the narrative might include a parenthetical paragraph like this:

“May I interrupt myself? The preceding paragraph is unspeakable, disgusting, implausible and totally unlike me. I know that to you I am just a man in a photograph – and indeed, I appreciate your efforts in bringing me to a kind of puppetlike life and transcribing my words as I speak them, even down to these too clever asides – but please consider that no doubt I was a real man, with an impeccable reputation in my time.”

Such narrative ambiguity, with its suggestion of the barriers to understanding another life (and also the self-consciousness of a narrator attempting to do so), is integral to a book where voice is often given – in unexpected ways – to voiceless people and beasts. As the Bengal Ming in the first story describes “the worst and most amazing day of my life”, we see (from our anthropic viewpoint) the gulf in thought and experience that separates him from human beings. In “Elephants in Captivity (Part One)”, a human editor supplies detailed, rambling footnotes to a story told in a captive elephant’s voice – these notes are so elaborate that they often take up more page space than the main narrative, until you realise that they are a narrative unto themselves. The “editor” doesn’t merely provide context and background explanation; he engages creatively with the elephant Shanti’s tale, writing “scenes” – as in a play – that describe the conversations in the herd. (“While the editor’s job is normally to clarify, when duty calls, he must not shy from the role of a sort of Shamspeare in Love. I humbly comply. Imagine, if you will, a scene, exterior, a jungle, daytime…”) And finally, he supplies the vital connection between his own life and that of the elephant, allowing us the reflection that perhaps this is a most unusual sort of autobiography.

Then consider “On the Banks of Table River (Planet Lucina, Andromeda Galaxy, AD 2319)”, a poignant story about foreignness – which could take the shape of inter-planetary suspicion, but could also mean a parent looking at his child and seeing her, for the first time, as someone with a life of her own. The narrator Thoren is an insect-like being who must sometimes interact with human “tourists” to his planet, and so immersed does the reader become in his perspective that it seems perfectly natural when he describes a human man’s “little egglike eyes” and expresses distaste at the sight of “broad white teeth, edged with brown-pink mouth flesh”. But what happens when his own daughter becomes alien-like? This dislocation is echoed in the more “realist” story “Demons” wherein a woman named Savitri – living in the US and feeling awkward when she has to leave a message on her teenage daughter’s answering machine – becomes convinced that she has mystically caused her husband’s death.

Ironically, Savitri shares her name with the mythological heroine whose devotion brought her husband back from the dead. I am an Executioner bears the subtitle “Love Stories”, but this is not the stuff of conventional romance: layers of doubt and betrayal run through these stories, even the ones that are about genuinely caring relationships. At least four of the pieces involve people hiding significant things from their spouses, but one never gets a sense of repetition; instead, it’s as if the angle of a mirror has been slightly altered to give us a new perspective on love and its possibilities.

Thus, in “Narrative of Agent 97-4702”, a woman – living in a totalitarian society that might be almost entirely made up of secret “agents” – must conceal her real job from her husband, who “tacitly participates in the fiction”. (But what, in turn, is he hiding from her?) In “Bibhutibhushan Mallik’s Final Storyboard”, an aging production designer for a distinguished Bengali film director has an affair with the director’s wife (“Only people the age of sixty-plus can properly enjoy love”) while desperately attempting to become recognised as an artist in his own right. The protagonist of “The Strange Case of Dr Raju Gopalarajan” conducts an elaborate subterfuge by practising as a doctor despite having no qualifications, and even his wife of many years does not know about his secret life. (Here too, the unnamed narrator – someone who knew “Dr Raju” and his wife – spends much time interpreting their story, extrapolating from the available details.) And in one of the most moving passages in this collection, the title story’s narrator muses in his poetically ungrammatical English that though he can whisper his darkest secrets into the ears of the prisoners whom he is about to execute, he can never share them with his new wife: “We didn’t talk nothing, and I wondered myself, what can I tell to her, who is always going to be there in the following days remembering it?”

This is a difficult book to categorise. It could be said that it is about passionate and duplicitous lovers, about narrators who are unreliable and deeply perceptive in turn, about animals and extraterrestrials who are strangers to people, and about people who are strangers to each other. But ultimately, a clinical listing of “abouts” is an inadequate way to describe such a varied yet organically linked collection. Hesitant as I am to descend into the language of the cheaply procured book-jacket blurb, this is among the most stimulating story collections I’ve read in a long while, and a reminder of the possibilities that still exist for short fiction in a jaded, post-post-modern world.