Ranbir Singh Sidhu’s first novel Deep Singh Blue (Unnamed Press/HarperCollins India) will appear in 2016. He is the author of the story collection Good Indian Girls (Soft Skull/HarperCollins India) and is a winner of a Pushcart Prize and a New York Foundation for the Arts Fellowship. His stories have appeared in Conjunctions, The Byword, The Georgia Review, Fence, Zyzzyva, The Missouri Review, Other Voices, The Happy Hypocrite, The Literary Review, Alaska Quarterly Review and other journals and anthologies. He divides his time between New York, India, and Crete. 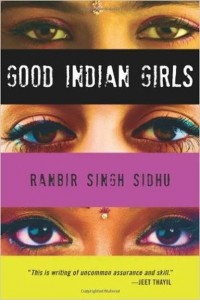 It is a good joke that the debut collection of short stories by Ranbir Singh Sidhu bears the title Good Indian Girls and a colorful cover of the type that would seem to promise heartwarming immigrant stories, when what lies within are explosive, difficult works that I’m fairly certain intend to rage-vomit on the heartwarming immigrant narrative. A good joke, and appropriate from a writer who describes books (in the story “Solzhenitsyn in Vermont”) as “duels moved to the page.” Says one character, books are “[t]he author against his past, the words against the author, the characters against each other, the reader against everyone. These were battles to the death….”

A death-match is a fresh and original take on the literary covenant, and the stories that follow are so twisty, button-pushing, and unexpected that I’m hesitant to do the kind of plot summary that would let people know what they’re getting into. Imagine tales that hunt down and exterminate the good, sacred and conventional in all its forms. Protagonists are often unlikeable. When they’re sympathetic, such as the young woman taking a self-improving night class (“Good Indian Girls”), or the plucky little girl misunderstood by her family (“Hero of the Nation”), or the young couple in love (“Sanskrit”), the next step is for them to do, say, or experience something demented.

Sidhu has a knack for the unsentimental in both macro and microcosm, and smaller-stage details might give a sense of the gist without spoilers. For example, in the title story, a girl’s “drunken” first kiss takes place “in a high school bathroom with Jeremy Drake who had not washed his hair in a month.” In the story “Neanderthal Tongues,” a gully is “an ancient wound,” a body is found “covered by a black scab of vultures,” and the hero, an academic, turns his research to “the lowest deposits of language,” “the first human grunts and mumblings.” Romance, landscape, death, language… none are spared.

Nor are the usual cultural taboos respected. A young man new to San Francisco (“The Good Poet of Africa”) meets a girl, sleeps with her, and remarks, “What surprised me was how stagnant and unresponsive her body remained. Her apparent hatred of her father had led me to believe the opposite would be true, but she was little more than a dead thing underneath me.” Later, “Our sex was hurried and anxious, performed standing up, her body pinned to the wall under the portrait of Singh. She was quick and unenthusiastic and, when she left, I noticed how her body odor clung to me.” The same character’s assistant at the Indian consulate is a man named Bhagwant, whose nickname is the degrading “Baggie,” and whose laugh is “almost squealing,” and who has “an irrepressible grin and the gait of a drunk gibbon.”

The destruction and reversal of everything—culture, history, convention—is Sidhu’s extremely powerful starting point for an immigrant narrative. The author is Indian by way of the UK and America, and systematically undermines the concept of a coherent Indian emigre identity. These are Indians who have never lived in India, who don’t know how to put on a Sari (“Sanskrit”), and who wouldn’t go back if they could (“The Consul’s Wife”). Their India has burned. In “The Discovery” a man attempts to negate the word India, cutting it out of every newspaper he can find, because he believes it to be an imaginary country he made up as a child, a “dreambirth nation whose dry, California dirt borders were no more certain than a cowpat, a yellow-grass-surrounded India.” India is not longed for or forgotten, it’s a place that never was, a name the man cannot even speak; it’s this loss that seems to fuel the characters’ sadness and their fractured senses of the world and the self.

The last story, “Children’s Games,” is appropriately set at an orphanage. The children, who “had lived here since they could remember” and who “knew nothing or little of their past,” created a hierarchy in which the whitest child was worshiped as a deity to the others. The children, whose hierarchy is described as “the highest point of our invented mountain of souls,” are adrift and monstrous, their artifacts are false, they have no culture, no family, no memory. According to the conventions of immigrant stories, the reader should pity them, but Sidhu makes them so savage, even that’s not allowed. In the end, the story launches into the surreal, denying all logic beyond its own.

These stories are beautiful, complex, unpleasant, dark, tough-minded and often quite funny in their evocation of the absurdity of our global cultural salad. In the words of one orphan:  “To me, England, France, the United States were all constituents of a single continent whose features I could not easily define, but within which Shakespeare lived alongside Hitler, The Beatles sang and Mozart composed, where George Washington daily crossed the Potomac and Coca-Cola was drunk in draft pints.” Out of the mouth of babes, we hear the truth. There are no Good Indian Girls here.

“In Good Indian Girls, Sidhu aims to provoke, taking on issues of identity in the South Asian diaspora, featuring characters who are often deeply conflicted and in situations that are neither comforting nor cliché.”

“Border Song, among the lightest pieces in this collection, finds the transformative grace in grief and a closure of sorts that eludes characters in The Order of Things, a masterpiece of a story that could have you marvelling at Sidhu’s incisive and distinctive perspective for the Punjab experience of violence, exile and estrangement—both within India and abroad.”

“Ranbir Sidhu is imaginative, with a dry, sly wit, very intelligent, and owns a wicked sensibility, all of which makes his fiction smart, daring, sensitive to human perversity, and keen in its observations. He is one of the most compelling and sophisticated younger writers today; and his writing is beautiful and entertaining.”

Lynne Tillman, author of American Genius A Comedy, and No Lease On Life

“When I first met Ranbir Sidhu, he was a resident at the Edward F. Albee Foundation in Montauk and while there, he displayed tremendous talent and dedication. His work takes risks, is often daring and imaginative, and I appreciate the intelligence he brings to his craft. I look forward to reading his new collection of stories, Good Indian Girls.”

“Whenever I pick up a story by Ranbir Sidhu, I feel as though I’ve been released from the cedarwood closet of literature into the fresh air of active creation; as though I’d been fitted with brand-new high-tech earphones picking up an infinity of eloquent microphones cleverly scattered around the world. The pops and squeaks of new life crackle in my ears, and even when they’re threatening or saddening, I’m inevitably overcome by the hope that they’ll never stop.”

Harry Mathews, author of My Life in CIA, Cigarettes and The Journalist

“The first-person narrator of ‘The Good Poet of Africa’ despises poetry, repays compassion with insult, and enjoys lying to children. but, by story’s end, the moral universe will be turned on its head, and the reader will empathize with Ranbir Sidhu’s loathsome protagonist. This is writing of uncommon assurance and skill.”

“Stories out of the box fill up Sidhu`s anthology of short stories that craft extraordinary tales out of ordinary realities. It is a treat.”