Sandip Roy is a commentator for the Morning Edition on NPR, a radio host on KALW 91.7 San Francisco, a senior editor at Firstpost.com, an editor at New American Media and a blogger for the Huffington Post. Don’t Let Him Know is his first book.

The Art of Happiness

In Anna Karenina, Tolstoy wrote, “All happy families are alike…” Author Sandip Roy disagrees with that opinion and proves it in his debut novel in stories, Don’t Let Him Know. 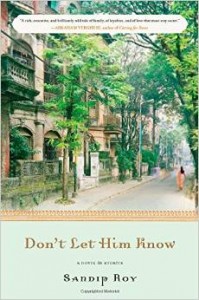 The stories center on the Mitra family of Calcutta—Avinash, Romola, and their son Amit—and examine the challenges of maintaining a fairly drama-free existence. Moving across time, zigzagging from the United States to India and back again, using specific events of varying importance, the scope of the two generations is fully measured as much by what they do not say or do as by their speech and actions.

The book begins with “A Happy Meal” in which Amit’s widowed mother Romola is visiting him in San Francisco. Immediately, there are references that continue to return in the Mitra family chronology: goodness underlain with secrets and submission to duty over personal desires. 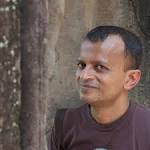 Amit finds a love letter hidden in a book he had brought from India and, strictly out of curiosity, questions his mother about the man who wrote it. Romola curbs her shock, for she was certain she had securely hidden the letter. Ironically, what Amit believes about the correspondence is far from the truth, and in that misplaced certainty, mother and son are drawn closer.

This new closeness allows Amit to articulate his thoughts about quitting his job as a computer engineer to become a chef. When Romola asks him why he would want to do that, he honestly replies, “… it’s not like anyone ever asked me what I wanted to do.”

Through the stories, Roy explores commonplace life experiences that result in myriad secrets, some of which are based on omission. Nine-year-old Amit is unable to own up to what happened to his Mickey Mouse watch in “The Gifts of Summer.” As a new bride in small college town America, Romola accidentally intercepts and then hides Sumit’s (a friend of Avinash) letter to Avinash in “Ring of Spices.”

Other secrets are connected to taboos. As a married man, Avinash lurks on a gay chat room and goes to a park late at night with a young man he meets in “Invitation to a Party.” In “White Christmas,” college student Amit loses his virginity to a bartender who is not only an American but also a black woman.

And yet other secrets are born simply as a result of spontaneous actions. Romola in “A Happy Meal” is seduced by the mouth-watering commercials and bright lights of McDonald’s. She steals away to escape the thumbscrews of widowhood, having given up meat and fish. In “Requiem for a Star,” Romola’s hidden diary of her courtship by a man who became a Bengali film superstar accompanies her to the man’s house as she joins the throngs of mourners.

All of the secrets are closely-held or, in some cases, forgotten. Equally, none of the revealed secrets affect the family negatively. I asked Roy how the Mitras’ secrets evolved.

“I wanted to show how we all have secrets,” he said in our e-interview, “and sometimes the secrets might be delicious ones like a flirtation that we will never act upon but will polish over and over again in memory.

“Some secrets tear families apart, some keep them together, some we hide from each other out of shame, some out of kindness,” Roy added. “I wanted to write a story about what looks like a happy family (and it is a happy family by most conventional definitions) and look at the secrets that lie in its core and how they might pass down from generation to generation. When Amit finds out a secret … he thinks it actually gives him a new understanding of his mother not knowing that the secret might have another secret within it.”

There is sadness in stories, for even good people from time to time experience disappointment and invisibility. This is elevated in “The Practical Thing to Do.” Following Avinash’s death and cremation, Amit is repeatedly asked what he’ll do with Romola now that she’s alone. Everyone assumes aloud that she will live with him in California; however, strapped for an answer, Amit offers another solution, one that does not sit well with Romola: she tells Amit that he could have asked her what she wanted since she was right there all along.

Rewind to “A Happy Meal,” in which Amit expresses the same feeling but without a mother’s anguish. “So much of this lack of sensitivity to personal desire actually comes from a desire to be good, to be dutiful,” Roy explained. “I wanted to make sure that my characters were not villains. They were faulty people but they did their best and even cobbled together a certain kind of happiness for the ones around them. Romola to me is a very dutiful woman but in fulfilling her duties she is also taken for granted.”

In the final story, “The Scene of the Crime”, Romola is still in America with Amit. This time, they travel to Carbondale, Illinois, where the author completed his graduate studies and where Romola lived during her first year of marriage.

Restless, she leaves the hotel at night in search of her old apartment building. Eventually, she loses her way but ends up having the best night of her life in a gay bar with a transvestite named Lady Bang La Desh. It is with Lady that Romola finds easy communication and a much-needed confessional.

The writing is well-tempered and without great urgency, creating a “life is generally good” feeling. There isn’t an unlikeable character from beginning to end; however, Roy allows tiny cracks to appear over time. When a character isn’t seen in his or her best light, we forgive for we understand and, perhaps, see ourselves more clearly.

Roy’s steady hand and clear vision reveal the characters and the relationships between them over the course of the stories as in traditional novels. Hints and confirmations of transgressions great and small are skillfully incorporated without relying on copious details that might otherwise weigh down the narrative. In the end, Roy’s carefully-nuanced storytelling reveals more by saying less.

Jeanne E. Fredriksen lives in Wake Forest, North Carolina, where she freelances in advertising and public relations. Between assignments, she writes fiction, enjoys wine, and heads to the beach as often as she can.  https://www.indiacurrents.com/articles/2015/02/04/art-happiness