Siddharth Chowdhury’s novel, Day Scholar, was shortlisted for the Man Asian Literary Prize 2009. In 2007, he held the Charles Wallace Writer in Residence fellowship at the University of Stirling in Scotland. His stories have been published in The Brown Critique, Debonair, The Asian Age, The Sunday Observer, the Tehelka Literary Review and other journals.

In the world of an aspiring writer

The Patna Manual of Style 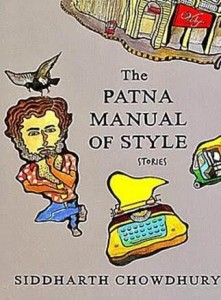 I almost didn’t read this book, for the jacket proclaimed — ‘Go to any party, in any country, on any moonlit terrace of the world, the best dressed man is always the one from Patna.’ It completely put me off. But, it’s Siddharth Chowdhury, his Day Scholar was interesting, and shortlisted for Man Asian Literary Prize. So, I started flipping the pages, and didn’t regret it one bit. I soon found myself lost in the world of the protagonist, Hriday Thakur, and his adventures with his life, work, family and friends.

A collection of nine interlinked stories, the book follows the literary ambitions of Hriday, through which we encounter many interesting characters that people the book. To begin with, there’s Jai Shankar Sharma aka Jishnu da, a colourful personality from Hriday’s Delhi University days, now an ‘importer of Russian blondes’; Samuel Crown, a punctilious proofreader who introduces Hriday to the ‘nuts and bolts of the publishing business’; the many women who have touched his life in some way — his teen-crush Sophia Rai, youth-flames Charulata and Anjali Singh Nalwa, wife Chitrangada, chronicler of graveyards Imogen Burns, and so on. 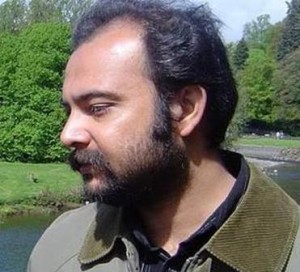 Though all the stories are breezy vignettes detailing an aspiring writer’s infatuation with life’s many colours, they don’t follow any timeline, in the strict sense of the term. The book kicks off with Hriday, having just lost his job as a sub-editor with a “third-rung ‘lifestyle’ magazine called Touch”, heading to Yadavji Litti Centre for his favourite Patna Large of four litties, two pieces of mutton in fiery red gravy, brinjal and potato chokha and a small katori of desi ghee, bumping into Jishnu da, and bonding over glasses of beer and Peter Scot, and fiery-hot stories from Jishnu da’s life. We then go back to his life post-MA, where the only certain thing in his life was Charulata, the one with Durga-shaped eyes, and his meeting with her parents to seek her hand in marriage. He is, at this stage, very determined to be a novelist, not wanting to do his MPhil and pursue academics, as also civil services.

Through the course of the next few stories, we learn that he has finally found his footing as an ‘ad-hoc’ lecturer in the English department at Zakir Husain College, with his book of stories to be published soon, and that he is happily married to Chitrangada, a marketing executive with a publishing house, who shares a perfect rapport with his mother.

The book wraps up with the Death of a Proofreader, that relates the positive influence Samuel Crown, ‘the best proofreader in all of Ansari Road’, had on Hriday early in his life, prompting him to get back to doing his M.Phil.

Well, that’s The Patna Manual of Style for you, in short. A great collection of stories that are, by themselves, short stories in the real sense of the word. The best part of the book, however, is its shifting narrative, that provides readers ample windows to understand Hriday better.

A quick read at 142 pages, the book left me wanting more. Such is the characterization of Hriday. However, another peek into his life would be a definite possibility in 2020, according to the author. While the book is instantly appealing to all those hungry for good stories, it will be especially so for people in the world of writing, publishing, proof-reading and journalism. I have a minor complaint though — there are quite a few editing errors. A keener eye for editing would have been certainly welcome.

Who can resist a brash book?

Here’s what you need to know about Siddharth Chowdhury’s The Patna Manual of Style.

Protagonist Hriday Thakur is a brat. The unapologetic, cocky, libidinous kind. One is subjected to snippets of his life which are shocking but never cease to entertain. Hriday wants to be a writer, in the process of which (but not because of) he meets a variety of interesting people who become a part of his stories. His narrative is also laced with what else, women. Every red-blooded Indian male must have a few women he can brag about — those who conquered his heart, those whom he conquered, and of course the wife.

The story is told in nine parts. The stories shift narratives but each narrator seems to have a keen gravitational pull towards Hriday. With all sorts of masala and dollops of drama (that we love), you get absorbed in this ‘charming, well-mannered’ boy-man’s story till you reach the end.

Don’t pick it up if you can’t deal with crass hindi and not-so-clean humour. The book has ample doses of both.

The book has many Quotable Quotes. Here are some of our favorites.

“After a dose of Patna Large all the burden of the world felt as light as a raindrop.”

“I want the man who, if he can’t write like Auden, has at least read all of Auden.”

“I like standing in the kitchen on Sunday mornings like this, as the weak February sun sneaks in bleary eyed through the window and the flat is still drowsy with love, and thinking, ‘here, right here, is the center of my universe.”

Read it if you have a devilish mind and can’t help but enjoy edgy literature; it will not disappoint. 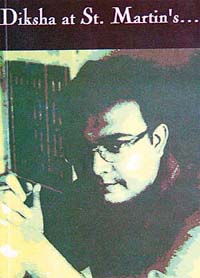 Diksha at St. Martin’s…We all have stories to tell. Either we write them and become writers or they die with us and are lost forever. It is this consciousness that compels Siddharth Chowdhury to pen down a collection of short stories. Diksha at St. Martin’s.These stories have strong autobiographical overtones. Born in Patna and educated in Delhi, Chowdhury’s collection is an example of the ‘two-locale’ phenomena polularised mainly by diaspora writers like Ruth Prawer Jhabvala, Jhumpa Lahiri and Chitra Banerjee Divakaruni, who use this technique to express the duality of their socio-cultural experiences. The difference between them and Chowdhury is that whereas their stories span two continents, his are set in two cities of India, Patna or Delhi.
It might be worth considering here that perhaps the angst of a modern existential writer prevents him from portraying the universality of human experience seen in the ‘one-locale’ stories of R.K. Narayan’s. Narayan’s stories were set in Malgudi, a locale which provided sufficient scope for commentary on life and its ironies. Therefore, the ‘two-locale’ stories become important as these provide different backgrounds for different experiences at different times in life. Based on this assumption, Chowdhury’s stories can be broadly categorised under two broad heads: stories of innocence and stories of experience. The former are set in Patna, his birthplace, and the latter in Delhi, the place where he gained maturity and an education.

The Patna-stories deal with issues of idealism and morality. Two stories, Homeward Bound and Seraphim and Cherubim, tell the stories of two teachers. The first, Javed, inspired by Ghalib’s poetry and integrity, is killed while going home in a train when he springs to the defence of a female Hindu co-passenger who almost gets molested by hooligans while her father and the other passengers in the coach turn a blind eye to the incident for fear of their lives. Ironically, though, idealism dies with the death of its upholder and later the girl, too, commits suicide, defeating the very purpose of Javed’s sacrifice. The teacher in the second story victimises and physically abuses his young students. Cherubim the teacher and Seraphim the victim-student, both named after angels, exhibit devilish traits, the first in his desires and the second in his retaliation to his teacher’s advances.
Outlaws deals with two friends who shoplift to add thrill and meaning to their lives while The Leader of Men and River of Dreams show the plight of those who are pitted against the middle class.
The Delhi-stories, on the other hand, center on the university campus and the new found emotion of love in The Adolescents, Will You be My Valentine? and24. Magical Omelettes… shows how an averagely intelligent student breaks down under pressure to clear the Civil Services examination. All these stories are bound to generate nostalgia among those who are or were a part of campus life.

In the title story, the Hollywood director, Martin Scorsese (also known as the ‘directing god’) is canonised as St Martin. His movies, especially Mean Streets, provide Chowdhury with a vision of life and free him from the shackles of ignorance, as does a guru. Therefore, the Hindu concept of diksha is appropriately used in Diksha at St. Martin’s.  Written from an omniscient narrator’s point of view, the stories show the ironies of a middle-class life. They are not exceptional but are told with a conviction that is honest. For the reader the thrill lies in recognising known names from literature and movies mentioned in the stories; and recognising the backdrop of the Bihari-Bengali neighbourhood, Kadam Kuan, Patna, and D.U. campus.

Chowdhury’s achievement in characterisation lies in portraying “A regular guy. There are thousands of them around like him, who are our friends, brothers and other assorted strangers. People who are the backbone of our society and family life… one of us.” And a character, Ritwick, appears in all the stories giving an impression of continuity to the stories.
The only unpardonable flaw in the book is the numerous typographical errors and editing mistakes which reflect poorly on the quality of the book