Sucharita Dutta-Asane – Cast Out and Other Stories

Stories Go Darkly Beyond the Margins of Everyday Reality 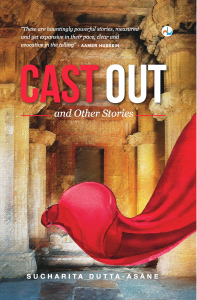 Dark shades stroll through Sucharita Dutta-Asane’s debut Cast Out and Other Stories. Dark moods amble at an unhurried pace through the sixteen short tales, ruminating on those aspects of Indian society that we tend to ignore in real life. In some stories, the shades and moods alike tilt towards the preternatural. They don’t lead the reader there, merely lean a little, as if to acknowledge what may lie beyond the lines of this physical world.

The reader can come away with a feeling of discomfort. A sense of déjà vu too. And that curious sensation of having read something that they chose not to take any notice of in the material world, but really ought to.

Dutta-Asane’s stories are plucked from the margins of the narratives of reality. From the gaps in journalistic reportage. Her characters are people you would barely notice while on your way during rush hour, because they are so familiar. Which is probably why when she lobs the stories at the reader, one instinctively wants to step aside. In Dutta-Asane’s perspective, the ordinary is full of enigma.

Many shades of dark

The book begins with “Half a Story”, where an unnamed narrator takes in an orphaned girl, named Ratri (or night), under her wing. Ratri is the daughter of a prostitute. A love child. But as the story unfolds, scene by scene, it becomes clear that this is not a story about love but of cowardice, a thing that slinks back into the shadows, the dark shades of society. It also takes a wry look at the petty hypocrisies of the bourgeoisie, thereby setting the tone for the rest of the book.

The second story, “Eyes”, traces a young couple’s boat ride into the Sundarbans. Like many of the others in the book, this one too is a disjointed narrative, written in both the first person and the third person, but in this case under the watchful eyes of an invisible beast. The story ends where the couple’s true adventure – or misadventure – begins. The first line of the third story “Another Life” – “She wrote her first letter to Sameer a month after he died,” pins the reader down. It’s a story of love – lived, lost, longed for and fought for, in quiet, tender ways.

“Fireflies” conjures up dark spaces and shadows. A willful child who returns as a grown woman with her daughter to her ancestral home wants to open up the secrets that eluded her earlier. Everything leads to one particular room and its door. The story is deftly written, in what I have come to recognize as Dutta-Asane’s trademark style. It has all the elements of a horror-mystery, if such a genre exists. The proof of course lies in the ending. Another story that employs a similar atmosphere is “Dhara.” The difference between the two is that while the former uses shadow play for atmosphere, the latter is actually made up of shadows, from this world and the next.

In “Night Duty,” a woman disappears on her way back from office. The premise of the story is familiar. We’ve read many disquieting news reports of female employees returning late at night in cars hired by their employers, a supposedly safe mode of transport. In her story Dutta-Asane recreates such a scene, but keeps the woman who has disappeared out of the spotlight, focusing instead on her parents and the male colleague who is the protagonist here.

“Cast Out,” the titular story, takes the reader deep into the sanctum sanctorum of a temple. The story revolves around a woman who defies taboos and invites the wrath of the villagers. But her defiance over-rides everything, even the idol in the temple. Although there is no direct reference, this story is an ironic observation – as well as a rebuke – of the ritual of so-called impurity that Indian women endure, have endured for centuries, even as a stone symbol of the goddess Durga’s menstruating vagina is worshipped in the Kamakhya Temple in Assam.

“A Train Story” is the most light-hearted story in the collection, and provides a welcome break. Written in an easy paced third person narrative voice, it’s a story about a rebellious woman – a feminist who is certainly no pus over, in spite of her very girlish traits – and her moment of epiphany.

“Fire”, on the other hand is sheer enigma, with each section, once again presented in a mix of third person and first person voices, offering scenes like portions of a puzzle. What the story succeeds in doing is to recreate sharp images of starving farmers at war with political goons and land sharks, with the figure of a lone woman looming like a giant shadow.

In “Bulldozer”, Dutta-Asane uses the same effect, but manages to retain the classic elements of the short story form in the way she rounds things up at the end. However, and perhaps because it is one of the longer pieces in the collection, the pace falters at times, and the narrative meanders. Another story, “Absolution,” which appears to be a meditation on Ahalya’s story in the Ramayana, a modern take if you will, although stylishly written, falls short of emotional quotient. It’s the same with “Cusp” the last story in the collection, which appears to be another meditative piece, a soliloquy by the protagonist.

“True, False, Right”, the eleventh story in the book, is about memory, its loss and the memorabilia of remembrance. It follows the meanderings of a woman, who, we learn as the story progresses, suffers from Alzheimer’s Disease. The parrot (in the story) who knows three words (the title) is both a physical leitmotif as well as a metaphor. Written with a touch so gentle, it’s almost like brushing against a feather wafting downward – yet, “True, False, Right” leaves a strong impact.

Another memorable story, which was the winner of the inaugural Dastan Award in 2013, is “Rear View.” It is a sharply critical observation of our society, and the culture of rape and hypocrisy that India seems to be becoming increasingly infamous for. Narrated in the first person, “Rear View” spares no one, least of all the narrator.

Other stories in the collection also highlight behavioral negatives, with hypocrisy and double standards being the author’s oft beaten dogs, such as the obsession with fair skin – “Night Song” – and the limiting of women’s freedom – “Shame”. The themes aren’t new, but what redeems them is the patina of low-budget-meaningful-Indian-art film that many of Dutta-Asane’s stories seem to gleam with.

We know that first books are capricious creatures. They don’t always sit still beneath the reader’s scrutiny. What’s more, in a collection of stories, the author’s progress as a writer is almost never linear. In Dutta-Asane’s case though, she seems to have a clear grasp of where she wants to go with her writing, with her authorial style becoming recognizable a couple of stories into the book. Her images are lush, though at times a little unnecessary, and therefore overwhelming. Her subjects are grounded in our regional spaces, urban and rural. And in this book, they are also immersed in the night and all its hidden spaces.

Link to the source:  https://scroll.in/article/880389/this-debut-collection-of-stories-goes-darkly-beyond-the-margins-of-everyday-reality

…Nearly every story takes both protagonist and reader to the edge. Can you cast out or be cast out by a child/ a woman/ a man/ a God/ society/ ghosts/ wilderness/ humanity/a neighbour/ yourself ?

‘Cast Out and Other Stories’, is a treasure trove, one for the ages, a beautiful evocative nuanced mirror of our times.”

Of Strong People and their Stories

The book jacket of Cast Out and Other Stories reads — A menstruating woman is cast out of a village and its temple. How does she react? Does her act make the idol impure? Another blurb says, Raater moton kaalo (dark as the night) Complexion and the woman. How does she choose to respond?

These two pieces are enough to label the writer Sucharita Dutta-Asane as ‘feminist’ or ‘women’s writer’. When asked about it, Asane says, “You know, we keep hearing of such labels like literary writer, commercial fiction writer, women’s writer. I think a writer is a writer, first of all. But, yes, I would like to point out that women tell stories differently. In that sense, I am a woman writer. Our issues, we understand a little differently, from the way men would understand. So in that sense, yes, I am a women’s writer. But if you want to put a tag that would sell, then no, I am a little uncomfortable with that.”

The 16 stories in Cast Out… published by Dhauli Books, are a blend of old and new, and include tales of both women and men, and how they react to a particular situation.
“I have written some of these stories over quite a long period of time, while others were written overnight. I wrote the first draft of Fire in 2007 around the Nandigram episode (in West Bengal). I wrote its final version in 2013. Some stories were published in various magazines and a couple of them won awards too. And, there are some new ones also,” says Asane, who is the editor of Kitaab, a Singapore-based literary magazine.

The conversation then moves to strong women as her characters and how their stories are received by members of their tribe. Often women are wary of the rebellious members of their tribe. Says Asane, “Most of my stories have very strong women. By strong, I mean that they know themselves and also how they deal with a situation/s. I hope the female readers are inspired by the stories of my characters. Someone might feel that ‘this could be my story’. There’s this tale about a dark-complexioned woman, who is constantly ostracised by her family. I had written the story in second person — you — so that the reader is this woman. But the woman doesn’t see the skin tone as a tragedy in her life. In the end, when she walks away from a relationship, the narrative turns to ‘I’. All of us go through these situations, but how we respond is a very individual thing. In showing an individual taking a stand, perhaps other women readers might think ‘this is so much about me and this is what I can do too’. It need not necessarily be something destructive.”

Strong female characters also don’t go down well with men. Many might dismiss women’s stories as just that — stories. So what reaction did the author get for Cast Out…?
“When a woman is raped because a land sharks want her land, it doesn’t mean that she has to give in or give up. She can fight back. That’s what I show. My husband is very open to what I have written; he understands where this is coming from. I have very good friends among men, who are writers, some are avid readers, and they have responded well to these stories. They understand the compulsions that drive these characters. They know that these stories are possible. Whereas other men might think that it is just a story,” she responds.

So how has she put together the stories? Do all of them have characters that fight back?

“There are some who fight back, some are on the brink of discovering themselves or who have discovered that they have a chance to fight back. They come to a point where they realize that their lives hitherto were like a ‘fairy tale’, and now they have to look into the mirror and face themselves. I call my characters strong because they are able to look into the mirror unblinkingly,” says Asane, adding, “The stories are not linked in terms of plot taking shape, but ideas. The first story is called Half A Story and the last one is called Cusp. Between these two, are all the other stories. This was conscious structuring of the content’.”