Several years ago, in one of my many horror-story anthologies, I came across a short story titled “An Interview with M Chakko”. It was in the form of a conversation and told of a strange island somewhere in the Indian Ocean where the protagonist, M Chakko, had once been shipwrecked. The women on this island only had half-bodies: the ones with only lower bodies were the “Ka” women while those with only upper bodies belonged to the “Lin” class. During the course of the story we learn of Chakko’s experiences living with a member of each class. 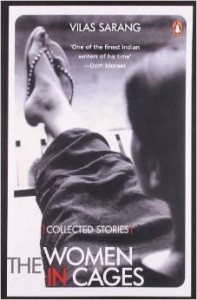 I won’t reveal anything about the ending except to say that it makes us question the veracity of M Chakko’s account, indeed his very sanity (though of course the more literalist readers would have been doing this from the outset!). The interviewer in the story appears to feel the same way, for he indulges in some pop psychology to try and understand this elaborate fantasy:

Interviewer: Perhaps you believed that women should always be imperfect and inferior. You didn’t like the idea of them being physically the same as men.

Chakko (after some thought): No, I don’t think it was that either.

Interviewer: What was the reason then?

Chakko: First I should admit that I’ve never given it much thought. But it seems to me that the half, the partial, gives something that the whole, or what appears whole, doesn’t.
Much of this talk has to do with the nature of the sexual arrangements on the island, and the story itself is built on Freud’s contention that “something in the nature of the sexual instinct itself is unfavourable to the realization of complete satisfaction”. But I also loved the delicate, poker-faced humour that ran through it – and the astonishing final act, which sneaks right up on the reader.

Much as I enjoyed the story, for some reason the author’s name never really registered in my mind; I persisted in thinking it was written by a Sri Lankan with a long and complicated name. Then, a few days ago, I sat down to read The Women in Cages, the collected stories of the bilingual (Marathi and English) writer Vilas Sarang, and discovered M Chakko’s strange tale afresh – along with a host of other delights.

Sarang’s short stories are simply written but very compelling and they cover a variety of themes and ideas, many of them with fantastical elements. “Barrel and Bombil” is about the mysterious communion between a whale-shark and a young deck-boy. In “The Odour of Immortality” a prostitute, with the help of a tantrik (and the blessings of Lord Indra), grows dozens of vaginas all over her body so she can service customers faster and make more money. (The connection between sex and worship is also made in another story where a man wakes up to find himself transformed into a giant phallus and is eventually mistaken by religious villagers to be the severed lingam of Lord Shiva.) In “A Revolt of the Gods”, clay statues of various deities come alive during a Ganesh festival and escape from their worshippers.

There are allusions to Kafka and Alice in Wonderland. Some of the stories have an indolent (or perhaps ailing) narrator who spends most of the day lying about in bed or reading. One such narrator hears the sound of airplanes roaring in the sky outside and wonders offhandedly if war has broken out, or if the sounds are in his own mind. Another maims flies on his bed with a folded newspaper and then reflects on the specifics of the act – when another fly lands next to a wounded one and circles it, what might be transpiring between the two creatures? Sarang takes unremarkable everyday scenarios like these and weaves gripping stories out of them.

But what I like best is the way he plays with the divide between the conscious and the sub-conscious, often moving indiscernibly from one to the other. In “An Evening at the Beach” for instance, there’s a passage where a character, Bajrang, joins a group of mourners at a woman’s funeral pyre. Looking at the other people standing around, he starts to speculate that they might have killed the woman so they would have a bonfire to warm themselves with on this cold night. It’s the sort of morbid little fantasy that most of us (I hope – otherwise it’s just me!) have created in our minds at some solemn gathering or the other – especially when we are emotionally distanced from, and perhaps a little bored by, the proceedings. The difference is, Bajrang gets so involved with his little idea that he actually starts to play it out in his own actions: stretching his hands out in front of the fire, even turning around so he can warm his back. (Understandably, the other mourners are incensed.)

One reason why I enjoyed this aspect of Sarang’s stories is that they tell us a lot about the writing process, about the dual worlds that many writers simultaneously inhabit – the real world with its relatively mundane daily routines, and the embellished one, where the writer is constantly analysing the things that are happening around him, creating and fleshing out alternative scenarios. Some of Sarang’s characters are a little like that – like writers with ideas for the next novel perpetually floating around in their minds.

In his notes on writing, some of which are included in this collection, Sarang laments the repeated undervaluing of “the guerillas of prose fiction” (i.e. the great short-story writers) and also the lack of a sustained tradition of short-story writing in Indian fiction in English. “We do not have unitive collections which may serve as primers for budding writers – e.g. Borges’s Labyrinths and Nabokov’s Dozen,” he says. “Does Indian English literature hope to produce a War and Peacebefore it has attempted something like ‘How Much Land Does a Man Need?’ or ‘The Death of Ivan Ilyich’?” He observes that at its best the short-story form is capable of achieving the purity and perfection of the finest poetry – which is something the novel, however great, cannot achieve. “The strength of the novel is length…But this precludes the kind of intensity and concentration – the ‘critical pressure’ – that most art forms strive for.”

Many of Sarang’s own short stories have the pure intensity he speaks of, and so The Women in Cages comes with the highest recommendation. (My favourite stories in this collection, apart from the ones I’ve mentioned above: “An Afternoon Among the Rocks”, “Testimony of an Indian Vulture” and “An Excursion”.)