Vipul Rikhi is a novelist, a teacher, editor, translator, scriptwriter and a poet. He has published a bi-lingual collection of poetry in Germany. His radio play In Hot Water won a “highly commended” special mention in the 2007 BBC International Radio Play Contest. He is author of a novel, House Out of Time and a novella, A Simple Love Story, and a verse drama  a verse drama,On a Winter’s Night

In 2012 Nights, Vipul Rikhi provides one possible answer to the question of what the classic One Thousand and One Nights would look like if it was told from a contemporary 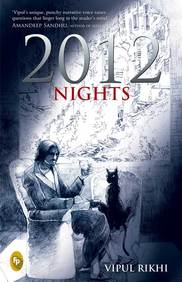 male perspective. In the original collection of tales, Scheherazade tells her husband, Schahriar, a story every night, but must leave each unfinished to prevent him from putting her to death, as he has done his previous wives after their first night of marriage. Rikhi employs many of the same structural and narrative techniques as the classic, such as the use of the framing story, embedded narratives, satire, parody and an unreliable narrator, but in other respects, his work does not resemble the folktale influences of its namesake.

The narrator of 2012 Nights is a lonely Indian man, separated from his wife—who was lovely, once—and in the company of only his drink and his cat, to whom he subjects his increasingly drunken ramblings night after night. The cat is called Schahriar, the name of the king in the traditional tale, though there is no sense that the cat is anything other than an ordinary cat. Only in the narrator’s drunken state does he personify the cat, directing unanswerable philosophical questions to him: “Is the world ending because you have consumed all tales, or are you here consuming tales because the world is ending?” 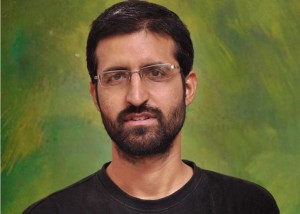 The urgency behind the telling of the tales is that the world is ending imminently, yet we don’t know whether this is simply the interior world of the narrator—the deterioration of his mental and physical health—or whether he really is living through the end of days. But this ultimately does not matter, as the world that he describes in his stories, an entirely recognisable world to contemporary readers, is racing headlong into its own destruction. It is a world of rampant consumer capitalism, of US cultural and economic imperialism, of wars on terror and other undefinable hatreds and of general disregard for the long-term survival of the human race and the earth.

All of these troubles are told through fables, parables, parodies and cautionary tales. So, for instance, a botanical bush is used to represent George W. Bush, his civilisation’s greed for oil is represented by Aladdin’s lamp, and the misguided desires of humans are symbolised by other objects and creatures: “Why didn’t Aladdin simply run away with the lamp? Well, the bush has a control mechanism to make sure no one can escape its influence. It produces objects that look like flowers; you know, like those plastic ones you see in many of the houses you raid every day. These flowers, they release a certain subtle aroma, severely addictive and imperceptibly toxic, the kind that you can smell in the lobbies of five-star hotels.”

Rikhi can be commended for his supple imagination and ability to see the universal and timeless in problems the contemporary world self-indulgently thinks are unique to us. How else could the events of 9/11 be described in the metaphorical language of the One Thousand and One Nights?: “With the help of the genie of the magic ring, then, Biladdin commandeered a couple of those fabulous flying machines I told you about. They were not exactly carpets; more like carpets, or birds, or perhaps unicorns. He taught a couple of his orphan foot-soldiers how to navigate them and sent them into the land of the bush, the united state of avarice, to wreak havoc and extract revenge, for the pain of having been at the wrong end of history. […] Let me make this short. The flying horses, or birds, or unicorns, crashed into the twin towers of the land of the bush, and burnt down those buildings and a dozen scores of innocent people.”

Unfortunately, after the first couple of chapters, these metaphors become tired, and most are not particularly witty. Things become unbearable with Pol Pot’s pseudonym: Soul Snot. The diatribes the narrator indulges in (granted, he is an increasingly drunk narrator) against the state of the modern world are no more original or insightful than an average Friday-night conversation at the pub with a group of lefty, intellectual types, anywhere in the world: “We still believe with undisguised fervour that pink skin is superior. We still suppose that we must all strive to be pink. We still bomb those who are not so. […] There are town squares and spaceships named after the great cultural hero, the intrepid explorer, who found, colonised and cleaned up vast lands for our use.”

The use of a drunk narrator enables the author to travel down a rabbit-hole of blurred images and colourful metaphors, but one feels that the use of such a speaker to make insightful comments about the state of the world was perhaps a mistake. Drunks are rarely as profound as they think they are, and Rikhi’s political and social commentary can too easily be dismissed as babble, an unfortunate result of the conflation of author and character that many readers make.

Where utilising a drunk narrator worked better was on the level of imagery, as the senses relay different, unexpected material when one is inebriated. 2012 Nights often felt like it would have made a good basis for a graphic novel. Indeed, the cover illustration in scratchy, contrasting black and white lines depicting a crumbling outside world and a man clutching a whiskey glass with only a cat for an audience is suggestive of the brooding, shifting world that lies within the novel. As 2012 Nights does not really tell us anything new, but does go about it in a way rich with anthropomorphic, zoomorphic and botanomorphic imagery, it seemed very frequently that the narrative would have lent itself to some form of visual accompaniment, whether interspersed illustrations or a more sustained comic book format.

However, Rikhi may have been one step ahead of all of these criticisms, as 2012 Nights feels aware that its circuitousness will be torturous to some: “A world with a deluge of words but no language, Schahriar! Each crazy person is an island unto himself, trapped in his little cell, babbling things no one can hope to understand. We’re in a solipsistic nightmare. We are the solipsistic nightmare! Everybody babbles and succeeds in meaning nothing.” On this reviewer’s island, there is not much space for this particular form of babble, but 2012 Nights may appeal more to fans of experimental fiction.

“History, mythology, politics and a whole lot of wisdom become the weaving points of all the stories.” https://soniareviews.wordpress.com/2012/12/02/book-review-2012-nights-by-vipul-rikhi/

“In 2012 nights , the narrator becomes Scheherazade and his cat Schahriar, and their destinies are tied together for 21 days by the thread of stories.”http://www.thehindu.com/todays-paper/tp-features/tp-metroplus/the-sense-of-an-ending/article4292475.ece

“The book had me at various levels and I must mention how punchy the narrative of the book is.” http://iyatingupta.com/book-review-2012-nights-vipul-rikhi/

A story looks at the underground marketing of `ready-to-use suicide kits’. “If a potential client knows where to find me, that means I’ve had a good reference. But this is rare. This happens only if a kit has been bought from me by a person for someone else… The someone else is usually one who wants to die and wouldn’t be able to make any future references. A pity. A job well done and a kit well made are of no use to us once they’re sold.”

Another story asks, “Is there a right time?”. The answer:”A second here or there was the difference between having an astrologically good or bad life, between a favourable and unfavourable planet in one’s horizon.”